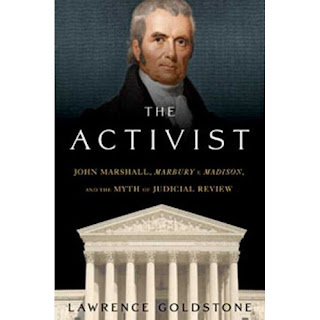 This interesting-looking (well, to me) Slate book club reminds me that I just read another recent book about Marbury that attempts to at least partially debunk the decision that Sloan apparently puts on a pedestal. I think at this point it’s worth distinguishing between two branches of of Marbury revisionism. The first attempts to attack the legal underpinnings of the decision (Marshall’s craftsmanship, ethics in taking the case, etc.) For reasons that I will become evident, I’m not really interested in this question.

The second branch of revisionism holds that the effects of Marbury have been greatly overstated, and that it did not “establish” judicial review in any meaningful sense. This branch of revisionism — advanced by scholars such as Mark Graber and Sandy Levinson — I agree with 100%. Marbury was a case of minor significance. Marshall made some unoriginal arguments in favor of judicial review, held that a relatively trivial clause in a federal statute was unconstitutional, and completely capitulated to Jefferson in resolving the case (as he would do consistently throughout his tenure.) To put it in Graber’s terms, judicial review of any political consequence requires a number of elements: judges, jurisdiction, litigants, authority, capacity, independence, and compliance. Some of these were established by the Constitution, more were established (or sometimes given) by elected officials. None were established by Marbury. Moreover, Marbury was rarely cited by the Court until judicial review was already well-established, and for the remainder of Marshall’s tenure he never issued an important ruling whose outcome was inconsistent with the preferences of ruling political elites, even if he had to make implausible legal arguments to do so.

Goldstone, however, is a revisionist only in the first sense; he is critical of the opinion and is skeptical about whether judicial review can be justified but seems to uncritically accept the received notion that Marshall single-handedly established the “awesome” power of judicial review. And, of course, if you don’t accept this assumption the question of whether Marshall’s reasoning is correct ceases to become very interesting, although some of Goldstone’s history is worth reading. What’s odd about Goldstone’s book is that he looks carefully at the surrounding cases, without seeming to notice how flatly they contradict the notion that Marbury “established” judicial review. Like most, he understands Marbury as essentially a capitulation to Jefferson, but he also discusses numerous other examples: most importantly, Stuart v. Laird, the case decided immediately after the alleged fountainhead of American judicial review in which the Marshall Court rolled over and accepted the repeal of the Judicary Act of 1801, which — because it abolished federal circuit courts — the justices all quite plausibly thought was unconstitutional.

Goldstone’s book is valuable to the extent that explores many underdiscussed cases in which the Marshall Court let the Jeffersonians have their way to save face. But so strong is the myth of Marbury that he never stops to consider about what these other cases say about the actual impact of this alleged landmark, or about how “awesome” a power that requires the ongoing support of the other, stronger branches to be relevant is.