The following is a Letter to the Editor from “Concerned Colonial Citizen”, regarding the prospects of a permanent alliance between the Colonial government and the rebel Cylon. It is titled “Why Tom Zarek Was Right”. The letter is spoileriffic.

I oppose permanent alliance with the Cylon, and believe that Vice President Zarek and Lieutenant Gaeta were correct to resist the Adama-Roslin military-political clique. Here is why:

1. We cannot trust the Cylon
Thus far, the Cylon have changed policy towards the Colonial government five times. The Cylon began the war by initiating a campaign of genocide against the colonials. They continued to pursue this campaign until, quite suddenly, the Cylon shifted to a policy of disengagement. This policy continued for about a year, until the Cylon undertook a policy which could be best described as benevolent despotism. Shortly after the failure of the despotism option, the Cylons resumed pursuit of genocide. After once again failing to accomplish genocide, the Cylon split between pro- and anti- genocide factions. More recently, the anti-genocide faction began throwing humans out the airlock of the base star, and training its weapons on the fleet.

What this demonstrates is that Cylon attitudes and goals are fickle; it is difficult to predict what the Cylon will pursue next. This is hardly unsurprising, given that the Cylon have an alien psychology and decision making process. It does, however, suggest that belief that we can “trust” the Cylon is the purest folly; the Cylon cannot even trust themselves. At some unforeseen future point, the Cylon we accept into our fleet may well decide to resume the process of genocide, or once again decide to pursue benevolent despotism. This represents an unacceptable risk, given the perilous situation of humanity.

2. The Cylon cannot trust us
Very recently, the Colonial government underwent a failed coup that very nearly toppled the political and military administration. The coup, which appeared widely popular in the fleet (25 of 35 civilian vessels obeyed the orders of the coup plotters, rather than that of the duly elected President) was based around opposition to permanent alliance with the Cylon. Several civilian ships have experienced anti-Cylon riots in response to efforts to retrofit their FTL systems. It should be painfully clear to all concerned, but especially the Cylon, that Colonial promises of “civil rights” are only as good as the Colonial administration that makes them, and that the long term survival of this administration is in deep question.

At first glance, this may seem to be only a problem for the Cylon; if they can’t fully trust us, so what? Deeper analysis reveals that any cooperative relationship is predicated upon mutual trust, and that if the Cylon fear Colonial treachery (as they should) they may pre-empt with their own. The missiles of the Cylon base star are a dagger aimed at the heart of humanity; if the Cylon ever begin to believe that the Colonial administration will not fulfill its guarantees, then those weapons may once again be aimed at Colonial ships. Moreover, it is near certain that the next Colonial election will be contested on the issue of Cylon citizenship. The victory of the pro-Cylon Roslin-Adama faction is hardly guaranteed, especially given the increasingly authoritarian nature of that faction, and its failure to deliver much-promised colonization on Earth. Alliance with the Cylon means that the election will be conducted under the shadow of a Base Star, with Cylon missiles ready to fire in the event of the “wrong” result. As D’Anna said, the Cylon can never be certain that the humans won’t seek revenge at some point; as such, the rebel Cylon must always retain a capacity for destroying the Colonial fleet.

3. The future contribution of the Cylon are in deep question
Short term collaboration with the rebel Cylon has paid some benefits. The rebel Cylon inadvertantly revealed the presence of remaining agents within the Colonial hierarchy, although distressingly these elements have yet to be purged. More importantly, the rebel Cylon contributed to destruction of the Cylon Resurrection Hub, dramatically reducing the military capacity of the hostile Cylon. Finally, collaboration with the Cylon led to the discovery of Earth, which was widely accepted as a Colonial goal in spite of the revelation of inhospitability to human life. However, the fruits of further collaboration are unclear.

On the military side, the rebel Cylon can offer us the services of a damaged base star, some intelligence on the hostile Cylon, and some technology improvements. While not utterly insignificant, these positives do not outweigh the risks of a permanent alliance. The Base Star in question has lost all of its skirmish fighters, which represent the main striking power of a Cylon capital ship. As it stands, the damaged warship is considerably less capable than Galactica (BSG-75). It does not, therefore, represent a transformation of Colonial military capacity, but rather an addition of limited value. The additional intelligence that the Cylon could provide would undoubtedly be helpful, but it must be remembered that the rebel Cylon were caught unawares by a hostile Cylon attack; allowing the Cylon to achieve complete operational and strategic surprise is something that we can manage without Cylon assistance. Finally, the technology improvements offered thus far would increase the jump capacity of the fleet. I submit that, while these improvements would be welcome, the survival of the fleet does not depend on an increase in its FTL capability, as existing capability has served the fleet well.

On the political side, the Cylon represent more of a liability than an asset. There is every reason to believe that the hostile Cylon hate the rebel Cylon more than they hate the Colonials, and thus that alliance with the rebels would preclude any future (less intrusive) peace agreement with the hostile Cylon. Indeed, the leader of the hostile Cylon was the strongest advocate for the policy of disengagement with the Colonials; the current “rebel” Cylon believed that intervention on New Caprica could “fix” the relationship between Colonial and Cylon. Humanity will not be secure until the completion either a comprehensive peace agreement exists with the entire Cylon community, or the complete destruction of that community. Permanent alliance and civil rights for the Cylon does not, as far as I can see, further either of those goals. 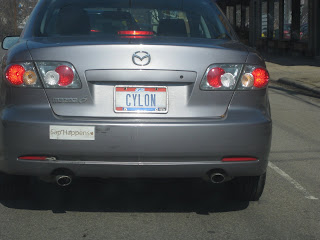 4. The Cylon are mass murderers
Four years ago, the Cylon massacred many billions of humans. They rounded up many of the surviving humans and created rape factories on an industrial scale. They pursued remaining survivors in an effort to complete the genocide. After a change in policy, they essentially enslaved the remnant of humanity under their “benevolent” despotism.

It was not fathers or grandfathers of the Cylon who committed these acts. These atrocities were not committed ages ago. These atrocities were not committed by rogue elements; there is no such thing as a Cylon civilian. The Cylons that propose, today, to become Colonial citizens were, just short time ago, planning and executing the almost complete annihilation of humanity. There is no conception of justice that can bear the introduction of these creatures into our society. The “Final Five” excepted, they are each and every one butchers; to excuse them their crimes would render the murders they carried out meaningless. It would destroy the fundamental tenets of our civilization. If we recognize that the rebel Cylon have civil rights, then they surely have civic responsibilities; as such, each and every one of them should fall under the authority of a war crimes tribunal, under accusation of genocide. Somehow, I suspect that these Cylon are not prepared for that degree of integration with Colonial society. If they cannot bear the responsibilities, then they do not deserve the rights.

The Cylon desire the protection of Colonial society. I, however, do not wish for the Cylon to be part of our political community. I do not wish to see them on our ships, or participate with them in our voting, or hear them in our Quorum. They are murderers, rapists, torturers, and enslavers, and they have no right to be part of our social and political life. The best that I can offer the Cylon is neutrality; we return to the state of disengagement that existed prior to the breaking of the peace. The Cylon can go there way in peace, and we can go ours.

It may be objected that pragmatic necessity demands the inclusion of the Cylon. On this point I can agree; collaboration on New Caprica was, to some extent, necessary for the preservation of the human race, and cooperation with the rebel Cylon in order to destroy the Resurrection Hub and find Earth was also necessary to our most dearly held policy goals. But the rebel Cylon do not now offer survival, but only convenience, and to accept their offer would be to deny the memory of the 49 billion or so that these very Cylon butchered four years ago. And that is far, far too high of a price to pay.