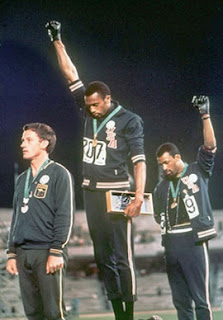 A surprising development (to me at least) has been the mass media’s recent rehabilitation of Tommie Smith and John Carlos. The same cultural institutions that almost universally excoriated the two American athletes for giving a Black Power salute from the medals stand at the 1968 Olympic games are now praising their heroism. Few things are more mainstream than ESPN award shows, and last night that network gave Smith and Carlos the Arthur Ashe Courage Award for their gesture. Meanwhile back in 1968, Brent Musberger, who today is one of ESPN/ABC’s top announcers, called Smith and Carlos “black-skinned storm troopers.” In 1999 Musberger granted that his comments at the time were “a bit harsh,” but emphasized that he still objected to “using the Olympic awards stand to make a political statement” — a view we can be sure is enthusiastically shared by the Chinese government, which will be hosting the Olympics next month. (It never occurs to people like Musberger that the traditional Olympic awards ceremony itself is about as pure a political statement as can be imagined).

Anyway, there’s a good deal of nervousness in Beijing and elsewhere that there may be unpleasantness in the form of (the wrong kind of) political gestures from athletes.

Which is precisely what Smith and Carlos recognized 40 years ago.