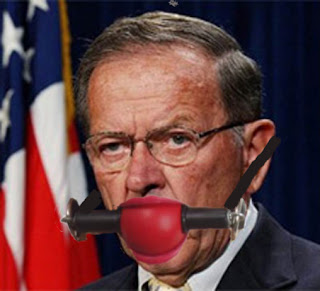 KTVA, the CBS affiliate in Anchorage, just ran a nearly unwatchable, nine-minute “human interest” segment on Ted “Tubemaster” Stevens (who might actually have to face a real Democratic opponent this year). The station’s intro to the piece single-handedly justifies the absence of television in our house:

You might be wondering: [“]In this interview, will he respond or talk about the current FBI investigation surrounding him?[“]

The answer–quite simply–is no. For months, Stevens has responded the same way when the topic has come up and has stated that he will not speak about that issue.

It’s worse than you could possibly imagine. The interview takes place in Stevens’ Girdwood, Alaska home that was remodeled by corporate felons; because of this house, Stevens may be fermenting mason jars of orange juice behind the laundry room radiator in a couple of years. But rather than press the issue — or simply move on to an actual news story — KTVA decided to show the softer side of a man who’s been in office since LBJ was incinerating Vietnam.

Senator Stevens eases into his Alaskan routine, like a small child grateful to be home. He’s here roughly 25 nights a year. After watching him scan the refrigerator, we can’t help but begin with one of the senator’s favorite topics: food.

“I get fetishes. I don’t eat white potatoes. I don’t eat things that have white sugar in them. I get hooked on stories I hear and things I read, so I love sweet potatoes. Sometimes she cooks something and I don’t eat it. And she says, ‘You’re a nutritional terrorist, that’s all,'” said Stevens.

I believe the proper term for that is “fascist.” But never mind. Before you can howl, “Oh dear God, make it stop — this horrible subdermal burning sensation, Lord have mercy make it stop,” the interview continues with an extensive discussion of the fact that even though he’s a complete prick about a lot of things, at the end of the day Stevens is, like, really old and sensitive and stuff.

“[T]he human body was really meant to live at least 120 years. They really believed in the biblical concepts of 120 years is entirely possible. It’s what you do to your body that you don’t live 120 years. And I said I take pretty good care of mine. This one guy said, ‘My God, you’re not going to stay around that long are you?’ (laughs),” said Senator Stevens.

There is no denying, the road ahead will be long, for many reasons. Alaskans are increasingly demanding more from the people they put into office. [Like, um, maybe not being criminals. — ed.] They are demands that take a toll across party lines. And yes, even on this face of Alaskan politics. Naturally, I had to ask:

When was the last time you cried?

“You’re getting real personal now. But I cry when I see a sick baby, (long pause)…and when I see things I can not change,” said Stevens.

Readers are encouraged to e-mail Sen. Stevens and briefly describe some of the many things he can not in fact change. Photos of sick babies may be sent directly to the Tubemaster’s office.

Ted Stevens: Weeping for Change (and for Sick Babies) in 2008!