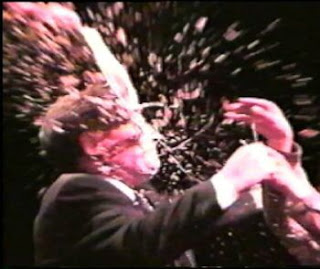 So as many folks are probably aware, Kristol launched his Times gig by misattributing a Michael Medved quotation to “the conservative writer Michelle Malkin” — a phrase that makes, in any event, about as much sense as “the gastronome Joey Chestnut.”

So in the spirit of kicking a deserving man while he’s down, here’s another nugget of crackerjack analysis from the Personification of Why Times Select was Actually a Brilliant Idea.

Some Democrats are licking their chops at the prospect of a Huckabee nomination. They shouldn’t be. For one thing, Michael Bloomberg would be tempted to run in the event of an Obama-Huckabee race — and he would most likely take votes primarily from Obama.

As someone once wrote, sadly, no:

NORMAN, Okla. — He arrived here for what seemed like it could be a big moment. Mayor Michael R. Bloomberg, eyeing a third-party presidential bid, joined Republican and Democratic elders at a forum to denounce the extreme partisanship of Washington and plot how to influence the campaign.

But even as the mayor gathered on Monday with the seasoned Washington hands on the campus of the University of Oklahoma, the surging presidential campaign of Senator Barack Obama seemed to steal energy from the event and set off worry elsewhere among Mr. Bloomberg’s supporters.

Mr. Obama has stressed that he wants to move beyond gridlocked politics and usher in an era of national unity. A key organizer of the effort to draft Mr. Bloomberg for a presidential run acknowledged in an interview on Monday that that Mr. Obama’s rise could be problematic.

“Obama is trying to reach out to independent voters, and that clearly would be the constituency that Mike Bloomberg would go after,” said Andrew MacRae, who heads the Washington chapter of Draft Mike Bloomberg for President 2008. “An Obama victory does not make it impossible, but it certainly makes it more difficult.”

Shouldn’t Kristol be spending his time advocating for an American invasion somewhere? If he’s just going to make shit up, shouldn’t he be aiming a little higher than this?