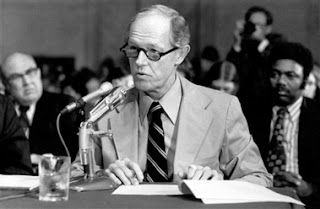 Before death carried him off to that great covert operation in the sky, Everette Howard Hunt, Jr. — who would have turned 89 today — sowed discord among his his earthly fellows throughout the worst years of the cold war. Trained in literary studies at Brown, Hunt’s literary enthusiasms somehow led him to the Office of Strategic Services after serving in the US Navy during the second World War. Over the next few decades, he prowled the globe on behalf of the CIA, uprooting communists — and anyone who looked like them — from governments in Latin America, East Asia and Europe.

In 1954, he helped eviscerate the elected government of Guatemala, unleashing forces that would eventually consume upwards of 200,000 lives during the course of a 40-year civil war. (Asked years later about the deaths to which he contributed, Hunt famously snorted, “Deaths? What deaths?”) Having made the world safe for capitalist bananas, Hunt soon turned his attention to Cuba’s Fidel Castro, whose “neutralization” did not proceed quite as smoothly as the ouster of Jacobo Arbenz. Charged with assembling a government from the ranks of disgruntled Cuban exiles, Hunt watched his career founder in the sands of the Bay of Pigs.

Rescued a few years later by the burglars and felons who comprised the Nixon White House, Hunt moved his softer side, orchestrating the array of black bag jobs and rat-fucking schemes that would eventually land much of the administration in state custody of some kind or another. During Nixon’s 1972 re-election campaign, Hunt arranged for McGovernite literature to be placed in the apartment of Arthur Bremer, the lunatic who shot George Wallace because he was an easier target than Nixon himself. At other times, he tried to sabotage other Democratic candidates by making them look like jackasses. As one of Hunt’s former collaborators explained,

Howard had some fliers printed saying that Mayor [John] Lindsay of New York was having a meeting and there would be free beer. Howard handed these fliers out in the black areas, and of course there was no meeting or beer, so the blacks would come for their beer and leave hating Lindsay.

Howard thought this was the greatest thing since Chinese checkers

Always helpful, Hunt protected his bosses from humiliation — for the time being, at least — by supervising the break-in at Daniel Ellsberg’s psychiatrist’s office, blackmailing Watergate co-conspirators and administering the customary financial leverage required to soothe the jangly nerves of those with the ambiguous fortune to be “in the know.” Hunt’s first wife, Dorothy, worked as an occasional courier for Hunt’s bribes until one of her flights went down in Chicago in December 1972. The $10,000 in her handbag survived, more or less, though Dorothy herself did not.

After serving nearly three years in jail — quite a bargain, actually, as a trade-off for his crimes — Hunt spent the rest of his life scribbling right-wing spy novels and fending off accusations that he’d been involved in the Kennedy assassination.