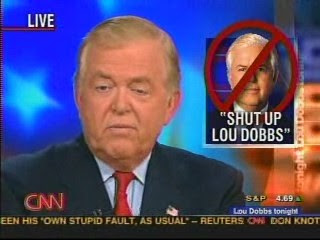 I consider, therefore, the prime mission of the ideal American commonwealth to be the perfection of the Aryan genius for political civilization, upon the basis of a predominantly Teutonic nationality[.] If such, in truth, be the transcendent mission of the American commonwealth, . . . what folly, on the part of the ignorant, what wickedness, on the part of the intelligent, are involved in the attempts, on the one side to sectionalize the nation, or on the other, to pollute it with non-Aryan elements. Both have tried, and both, thanks to an all-wise Providence, have failed; for both were sins against American civilization, and both were sins of the highest order.

The life of Lou Dobbs is a familiar rags-to-shithead fable. After growing up in small towns in Texas and Idaho, Dobbs managed to earn admission and a full scholarship to Harvard. During his sophomore year, he found himself “mesmerized” during a debate between Paul Samuelson and Milton Friedman at MIT, and — inspired by the evangelical, free-market warbles of the latter — he soon chose a major in economics. By the mid-1970s, a series of meanders led Dobbs to journalism, and he eventually found himself with a job at CNN. Having toiled away the next two decades as a sycophantic financial correspondent, Dobbs — like all fake populists — eventually found glory by persuading himself that the republic faced coequal perils. In an era of Bush capitalism, Dobbs saw the nation’s vitality sapped by venal, corporate aristocrats and their government abettors; at the same time, his viscera trembled as he watched a subproletarian army of gardeners, dishwashers and day laborers spill forth from Mexico and all points south.

These days, the ample jowls of Lou Dobbs can be seen every night of the week, undulating like two sacks of warm, curdled cheese as he charts the alien menace infiltrating our southern border. Dobbs, who once described the Minutemen as a “terrific group of concerned, caring Americans,” decided over two years ago to turn his show into a karaoke machine for nativist misinformation and vigilantism; since then, he has addressed the subject of immigration with an angry, masturbatory zeal, warning his viewers of the economic rot, cultural disarray and biological pestilence that will presumably result from the endless, unthwarted flow of “illegals” to the United States. To lend “perspective” on these issues, Dobbs routinely offers air time to race-baiting trogs like Glenn Spencer of the American Patrol, Chris Simcox of the Minutemen, and Barbara Coe of the California Coalition for Immigration Reform. In one of Dobbs’ finer moments of racist demagoguery, he actually ran a map sourced to the Council of Conservative Citizens, a group that promotes the baseless rumor that Chicanos wish to recapture “Aztlan,” the Mexican territory lost to the US in 1848. To be sure, adherents to such beliefs are not difficult to find — and even less so now that Fightin’ Lou has offered their ressentiment a higher amplitude and an undeserved aura of legitimacy.