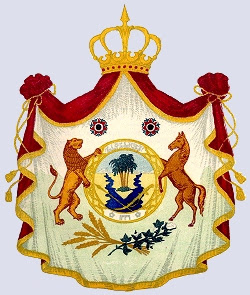 The Hashemite dynasty traces its lineage to the prophet Muhammed’s grandfather, and in particular to Muhammed’s daughter Fatima. The Hashemite played a prominent role in early Islamic politics, and from the 13th century on held the title of Sherif (or Emir) of Mecca. The Hashemite accepted the nominal suzerainty of Ottoman Turks in the 16th century, but retained de facto autonomy.

In 1916, various Arab tribes joined together in a revolt against Ottoman rule. Sharif Hussein bin Ali played an important role in the revolt, as did his four sons. Although guaranteed independence after victory over the Ottomans, most of the Arab lands were divided between France and the United Kingdom. Faisal, son of Hussein bin Ali, was declared King of Greater Syria in March 1920 by the Syrian National Assembly. This did not sit well with the French or the British, and Faisal’s reign last only three months. In part to quell an Iraqi revolt, the British made Faisal King of Iraq in 1921, and his brother Abdullah Emir of Transjordan at around the same time. Sharif Hussein bin Ali declared himself King of Hejaz and Caliph, but was soon thereafter driven from power by the Saud family.

Faisal I reigned over Iraq until 1933, when he suffered a heart attack while visiting Switzerland. He was succeeded by his son Ghazi, who died in a suspicious car accident in 1939. Ghazi was succeeded by Faisal II, who reigned until 1958. In response to the creation of the United Arab Republic (the brief political unification of Syria and Egypt), the Hashemite monarchs of Iraq and Jordan decided to create the Arab Federation of Iraq and Jordan in early 1958. As the senior member of the family, Faisal II became King of the new entity. Unfortunately for Faisal, however, an Iraqi colonel named Abdul Karim Qassim launched a successful coup in July. The King and the Crown Prince were executed by the coup plotters on July 14, essentially rendering the Arab federation a dead letter.

King Faisal II was succeeded in pretence by Prince Zeid, brother of Faisal I. Zeid bin Hussein was in London during the coup (he was the Iraqi ambassador to the United Kingdom), and was recognized as the rightful King of Iraq by the Jordanian Hashemites. Zeid died in 1970 and was succeeded as pretender by his son Ra’ad bin Zeid. Although the Jordanian Hashemites recognize Ra’ad bin Zeid as the rightful Iraqi monarch, Sharif Ali bin-al Hussein, a relative of Faisal II, has also claimed the throne. Sharif Ali became a participant in various Iraqi exile organizations beginning in 1991, and actively encouraged the overthrow of Saddam Hussein. In this pursuit he found neoconservative allies. In the document A Clean Break, a group of neoconservative “intellectuals” including Richard Perle, Doug Feith, and Charles Fairbanks Jr. proposed returning the Hashemite claimant to the throne of Iraq. Such a move would purportedly have served to undercut support for Hezbollah, weaken Syrian ambitions, and weaken the grip of the Iranian regime. Sharif Ali called for a quick restoration of the throne in the name of Iraqi national unity, but in the chaos that ensued after Hussein’s deposition this request was not met.

Ra’ad bin Zeid has demonstrated little apparent interest in the throne of Iraq, but is unassailably the legitimate heir. Sharif Ali has a very tenuous claim on the throne, but has taken active steps to restore the monarchy. However, since Sharif Ali’s party won only .16% of the vote in the last Iraq elections, prospects for a return to the throne seem fairly grim. Ra’ad bin Zeid lives in Europe, while his son (the heir apparent) serves as Jordanian ambassador to the United Nations.

Trivia: The heir to what throne once presented Ronald Reagan with a baby elephant?