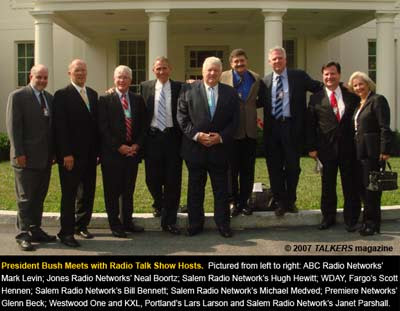 Pictured above: The Dead-Enders Caucus, meeting with the president for Tang, butter cookies and frank conversation about “the calling of our time.”

By sheer chance, I actually happened to catch Mark Levin yesterday afternoon as he described his visit with The Decider. He was, not to put too fine a point to it, invigorated. Smarter than Reagan, he observed at one point. Smarter than Gerald Ford, he added. A man who was transformed by 9/11 and who genuinely cared about families who’d lost loved ones in Iraq. A man with a vision. And so on. It was a remarkable fifteen minutes, alternately amusing and pathetic.

Today, I see, there are similar howls of adoration from Boortz:

My principal impression this time mirrored what I told you last year. Anybody who thinks that this president is, somehow, ignorant or stupid is either sadly misinformed or delusional. Let the left think this man is unintelligent at their peril. I was particularly impressed by his grasp of the political and cultural interactions among the various Muslim sects and countries of the Middle East.

Another observation … actually a reinforcement of what I felt after last September’s visit. This man was completely transformed by the 9/11 Islamic attacks against our country. From the moment he heard of the attack in that classroom in Florida to this day he has been completely dedicated to the cause of protecting and defending our country from another such attack.

I will say on today’s show that I am confident about the course of the war and about the momentum in Iraq, as well of the president’s absolute commitment to doing right by the troops and his concern for every lost and wounded soldier and their families. President Bush’s command of the details and his broad view of the conflict is reassuring, and among my comments to him was the wish that he found more opportunities to engage in long interviews that would allow the American public to see that grasp and that commitment.

And some guy named Scott Hennon, whose obscenely sycophantic report really must be digested in its entirety. But since Hennon’s report consists of a single, 2600-word paragraph (no kidding), I’ll provide some of the highlights. (Note: Ignore the typos and grammatical errors, as Hennon appears to have been typing with one hand.)

We each had a glass of ice water with a Presidential seal embossed on in it at our spot…the anticipation was heavy in the air for the arrival of the President. Jared Weinstein, the President ‘s personal assistant (who previously worked for Andy Card and visited Moorhead with him days before the 2004 election) placed some peppermint candies at President Bush’s spot and filled his water glass, skipping the ice. We knew the moment was near. Just then, a familiar voice is heard from behind me and the President burst in the room and says to the group…”Hey, come on in hear gang” as he gestures to the Oval Office steps away. I was the first to enter and the President extended his hand and asked “How’s the North Dakotan today?”…”great to see you again”…as he pointed to a spot for me to sit, to his left. The hosts all filed in and took a seat, but I found myself elbow to elbow with the most powerful man in the World. . . .

He started with an explanation of why he wanted us in the Oval Office. He said the room was the place where he made the vast majority of his decisions as President. He gave us a sense of the magnitude of those decisions and what information he learns on a daily basis there. He shared a story of one of the first decisions he was asked to make in the Oval Office. What style of rug would he want? He chuckled and explained to the questioner about to ask Laura…as he didn’t do rugs. He used that as a metaphor to explain how he manages the awesome responsibility he has. His role is to focus on the big decisions utilizing his core convictions that the United States is a force for good in the World. That we must lead and take on evil where wherever it is, so as to assure as many people as possible will enjoy the God given inalienable right to freedom. He spoke very eloquently about Good vs. Evil and even brought the story back to the rug, which was designed with only this Presidential input….to let it reflect light so as to influence his decision making. Light as in good vs. darkness as in evil. His descriptions of the enemy and their brutal, cold-blooded-killer tactics were enough to make a graying group of radio talk how hosts want to enlist and serve this country in uniform.

I wish I could quote him exactly or play a recording of the conversation. Because the George W. Bush I met with in the Oval Office today is a very different person than the man you see in our media. He is a great President. We are very blessed that he is our Commander in Chief. History will judge him well.

As they say, pure comedy gold!