In 1806, a 36 year old Albanian man named Muhammed Ali was appointed Viceroy of Egypt. The son of a tobacco merchant, Muhammed had distinguished himself as an officer in the Ottoman Army in battles against the forces of Napoleon Bonaparte. Napoleon’s invasion had done serious damage to Egypt’s ruling Mamluk caste, but Muhammed Ali still had to struggle to resist Mamluk pressures for independence from Istanbul. In 1811, Muhammed invited 700 prominent Mamluks to his home to celebrate the launching of a war against Wahhabists in Arabia. Upon their arrival, he ambushed and slaughtered all but one. Surviving Mamluks were hunted down and massacred until the last remnants fled to Sudan. Consequently, Ali conquered Sudan. Ali spent the rest of his time trying to bring Egypt into the modern Mediterranean economy through the development of infrastructure, social services, and an expansion of the textile industry. These projects helped fund the reform of Egypt’s army and navy. 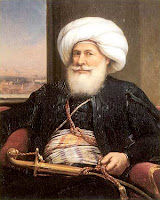 In 1827, the Egyptian Navy was on loan to Muhammed’s liege, the Ottoman Sultan. At the Battle of Navarino, fought against a combined British, French, and Russian fleet, both the Egyptian and Ottoman navies were annihilated. This irritated Muhammed Ali, who demanded Syria in compensation. After thirteen years of on-again, off-again war, Muhammed Ali won for his family the right of hereditary ownership of the positiion Viceroy of Egypt. Egypt would more or less achieve independence in 1867 under Khedive Ismail, grandson of Muhammed Ali. This de facto independence didn’t last, as a British invasion in 1879 essentially put control of Egypt in British hands. Khedive Abbas II tried to bring Egypt into World War I on the side of the Central Powers in 1914, resulting in his immediate deposition by the British. Sultan Husayn I, son of Ismail, became the first ruler of formally independent Egypt. Husayn’s brother Fuad would become the first King of Egypt in 1922.

Farouk, son of Fuad, became King of Egypt in 1936, at the age of 16. Although educated in England, Farouk favored the Axis in World War II, and kept Egypt neutral in spite of the British occupation. The King led a lavish lifestyle, and became known as a kleptomaniac; in addition to stealing a sword from the Shah of Iran and a pocket watch from Winston Churchill, King Farouk regularly pilfered in the streets of Cairo. This didn’t help the perception that his regime was corrupt and wasteful. In 1952, a coup launched by an Army officer named Gamal Abdel Nasser forced Farouk to abdicate in favor of his six month old son, Fuad II. Fuad’s reign ended a year later with the abolition of the monarchy. Farouk would die at an Italian dinner table in 1965, rich food and a sedentary life having taken their toll.

King Fuad II has lived most of his life in France, where he and his children have been educated. Fuad has not renounced his claim to the throne, but there seems little indication that he is making any active efforts to reclaim it. Prospects for a restoration appear grim. As the Muhammed Ali dynasty is of Albanian stock, it holds little interest for Egyptian nationalists. There also appears to be very little residual good feeling for King Farouk. Even considering the repression that marks the modern Egyptian political system, notable political support for a restoration appears absent.

Trivia: What deposed monarch enjoyed an independent reign of less than a month, ending in his flight to the home country of his former colonial masters?