I shouldn’t be surprised. Some milblogger compiles a list of quotations from “largely clueless” folks “living in ivory towers” who mocked the wingnut flash mob that appeared around the Beauchamp articles in TNR. He also suggests that everyone on the list “probably regrets” what they wrote, but that “Google’s cache” will — ha! — prevent any of them from deleting their totally embarrassing attacks on impeccably credible folks like Treason-in-Defense-of-Slavery Yankee, Ace O. Spades (Heterosexual), and “Fragmaster” Jimbo at Blackfive.

So who gets quoted from this site? Rob!

I call bullshit. Why not link to me? I’m unserious, too! [/sad Althousian desperation] If anything, I’m twice as clueless as him, and I wake up each day with a millstone of regret around my neck. More importantly, unlike the merely metaphorical ivory tower in which Rob lives, I live in an actual ivory tower, from which I peer down upon a world that nauseates me. Don’t believe me? Behold: 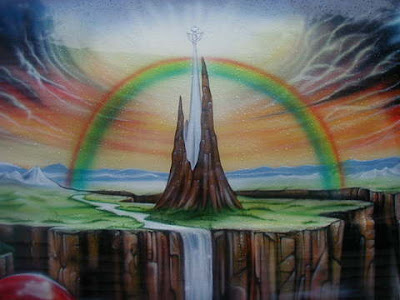 The waterfall is a nice perk, as it speeds me effortlessly to my office (also comprised largely of ivory), where I have written all sorts of regrettable things like this, from July 19:

What’s certain, of course, is that most of the frothy reaction to [the New Republic articles] will come from people who at other points have minimized the significance of the abuses at Abu Ghraib and Baghram; doubted the occurrence of massacres at Haditha and elsewhere; and stupidly questioned the veracity of perfectly valid survey instruments used to estimate excess Iraqi deaths since the start of the war. What’s more, these are folks who generally reaffirm anything Michael Yon has to report — baked children and all — while assuming that every dispatch coming across the AP wires has been ghost-written by Jamil Hussein and that every Reuters photo has been through several rounds of Photoshop. They’ve accepted every home-brewed argument set forth by the Kagan family to the effect that the surge is working; they’ve cheered the pardoning of convicted criminals like Scooter Libby; and they’ve written breathlessly about every domestic “terror plot” as if they were not, in fact, holding a warm sack of shit. And they’ve accomplished all of this with Cheeto dust wafting in the air, as if sprayed from an aerosol can.

I clearly need to be nastier and more unserious.