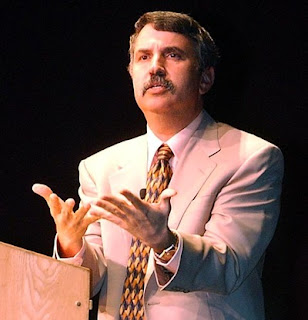 Known mostly for his oracular declarations on the high wisdom of free trade, Friedman has also cultivated his inner thug, whose obscene bellowing he occasionally insists his readers hear. Friedman has, for example, observed in The Lexus and the Olive Tree that

[t]he hidden hand of the market will never work without a hidden fist. McDonald’s cannot flourish without McDonnell Douglas, the designer of the U.S. Air Force F-15, and the hidden fist that keeps the world safe for Silicon Valley’s technologies to flourish is called the U.S. Army, Air Force, Navy and Marine Corps.

All of which may be true enough; that Friedman celebrates this state of affairs, however, makes him not only factually accurate but morally reprehensible. In a typical stream of billingsgate unleashed during the 1999 Kosovo war, Friedman — the self-appointed organ-grinder for globalization — openly declared his indifference to international law, advocating collective punishment of the Serbian people in language that recalled the worst atrocities of the second world war:

Let’s at least have a real air war…. It should be lights out in Belgrade: Every power grid, water pipe, bridge, road, and war-related factory has to be targeted. Like it or not, we are at war with the Serbian nation (the Serbs certainly think so), and the stakes have to be very clear: Every week you ravage Kosovo is another decade we will set back your country back by pulverizing you. You want 1950? We can do 1950. You want 1389? We can do 1389 too.

In yet another flight of aggro fancy, Friedman urged President Clinton in 1998 to bomb Iraq “over and over and over again,” atomizing a “different power station in Iraq every week, so no one knows when the lights will go off or who’s in charge.” On this last count, at least, Friedman eventually got his wish.

The next six months may or may not prove to be a decisive period for the American war in Iraq, but we may be assured of one simple, gleaming fact: in six months, Thomas Friedman will still be a wanker of colossal and undeserved repute.