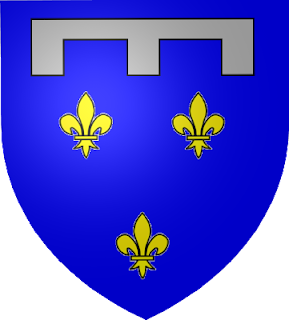 The House of Orleans is a cadet branch of House Bourbon, itself a cadet branch of the Capetian dynasty that ruled France for nearly a thousand years. The “founder” of the modern House of Orleans was Philip I of France, son of Louis XIII and younger brother of Louis XIV. Philip was given the title Duc de’ Orleans by his father, a title that carried considerable prestige and influence in French royal circles. Philip II served, for eight years, as regent to King Louis XV.

Louis-Philippe II, Duc de Orleans, earned the hatred of Marie Antoinette and led an unsuccessful naval career before choosing to support the Revolution in 1789. As the Revolution developed, the royal court blamed Louis-Philippe for supporting and agitating the radicals. In October 1789 he was dispatched by the King to Great Britain, but returned in 1790 to serve in the National Assembly. In spite of his measured support for the Revolution, he fell under suspicion as a potential claimant to the throne. Arrested in April 1793, he was tried for treason and guillotined on November 6, 1793.

Louis-Philippe, son of the Duc de Orleans, was initially very supportive of the Revolution. He served with the Army of the North, but fled to an Austrian army camp shortly before the arrest of his father. Over the next 22 years, he lived in Germany, Switzerland, Austria, Spain, the United States, and finally Great Britain. After the fall of Napoleon Bonaparte he returned to France, and maintained cordial relations with Louis XVIII and Charles X, although he distanced himself from the latter’s repressive policies. In no small part because of his reputation as a liberal, he was chosen to succeed Charles X after the 1830 July Revolution. Louis-Philippe ruled as “King of the French” rather than as King of France, and was known as the citizen’s king.

Eighteen years passed, and the French were once again revolting. The February 1848 revolution drove Louis-Philippe from power, and he fled to Great Britain in order to avoid the fate of Louis XVI. He left his nine year old grandson, Philippe, as heir designate, but Philippe was in turn rejected and exiled by the French. Louis-Philippe died in 1850. Philippe volunteered for the Union Army in the American Civil War, and served in the Army of the Potomac during the Peninsular Campaign. Philippe anticipated a restoration of the monarchy in the wake of the Franco-Prussian War, but his Bourbon kinsman Henry V refused to reign under the Tricolour, and the monarchist moment in France was lost. Although Henry V failed to recognize Philippe as his heir, the former’s death reunited in the minds of most the legitimist and constitutionalist claims to the French throne. The Orleans would spend much of the next century in exile, although Henry VI joined the French Foreign Legion in 1940. The abrogation of the law of exile in 1950 allowed the family to return to France.

The modern House of Orleans continues to lay claim to both the constitutionalist “King of the French” and the legitimist “King of France” titles. The current heir to the throne is Henri Phillipe Pierre Marie d’ Orleans, and goes by the titles Comte de Paris and Duc de France. Upon restoration, he would become King Henri VII. In 1987, Henry sued Louis Alphonse in French court to prevent the latter from using the royal arms and, essentially, from claiming the French throne. French courts threw the suit out without addressing the merits. Although Henry has by far the most compelling claim of any on the French throne, prospects for a restoration appear grim. Monarchical sentiment remains weak in France, and barring a profound ideological shift, even a constitutional restoration is unlikely.

Trivia: A grandnephew of what monarch founded the FBI?