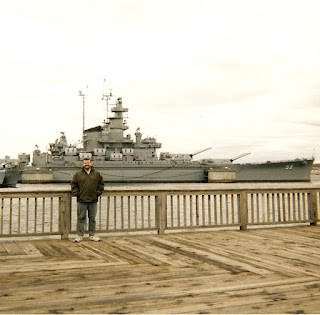 The four ships of the South Dakota class were a follow up to the two ship North Carolina class. Initial plans for the South Dakotas had called for a reduction in speed from the 27 knots of North Carolina to 23, which would allow them to operate with the older ships of the battle line. However, it soon became apparent that most new foreign battleships had speeds in excess of 27 knots. The decision was made to increase the speed of the South Dakotas, while at the same time keeping the improved protection that had been worked into the design. The result was not completely satisfactory. The South Dakotas were more heavily armored than their predecessors on a slightly smaller hull, but at the expense of weaker underwater protection and an extremely cramped engineering section. Nevertheless, the South Dakotas were extremely effective ships, the only ships to fulfill the Washington Naval Treaty requirements while carrying 16″ guns, being protected against 16″ shells, and having a speed of 27+ knots. They also had a large and effective anti-aircraft armament.

USS Massachusetts, third of the class, carried 9 16″ guns, displaced 35000 tons, and could make 27 knots. She was commissioned in May 1942, and five months later joined Operation Torch, the US invasion of French North Africa. Although it was hoped that French resistance to the invasion would be minimal, a major French naval presence at Casablanca threatened to disrupt the operation. The incomplete but operational Jean Bart, a new French battleship, was accompanied by several large French destroyers. Massachusetts and several escorts were detailed to subdue this force. On November 8, while supporting landings near Casablanca, Massachusetts came under fire from Jean Bart. Massachusetts replied, hitting Jean Bart several times. Massachusetts and her escorts then opened fire on and sank a pair of French destroyers. French shore batteries inflicted superficial damage on Massachusetts, the scars of which are still evident on her decks today.

After a truce was concluded with the French, USS Massachusetts was dispatched to the Pacific, arriving in March 1943. The rest of her career would be consumed with carrier escort, convoy escort, and shore bombardment. At the Battle of Leyte Gulf, Massachusetts was part of the force that narrowly missed engaging Kurita’s battleships off Samar Island. She and the carriers she escorted operated against Formosa, Kwajelein, Iwo Jima, Okinawa, and mainland Japan in 1944 and 1945. Her final mission was against an industrial complex at Hamamatsu on August 9, 1945, and it is thought by many that the last 16″ shell fired in anger in World War II came from Massachusetts. 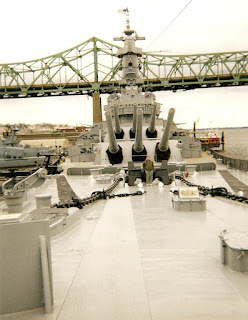 USS Massachusetts returned to the States, and decommissioned in 1947. She would remain in reserve for 15 years. Because of the cramped conditions of the South Dakotas, the Navy preferred to use Washington and North Carolina as training vessels. Their slow speed relative to the Iowas prevented their reactivation for the Korean War. In the late 1950s, the USN began disposing of its remaining slow battleships, first the “Big Five”, then the SoDaks and the North Carolinas. Fortunately, a group of veterans from Massachusetts state put together a campaign to raise the money to save USS Massachusetts and convert her into a memorial. She was berthed at Battleship Cove in Fall River, Massachusetts in 1965, and remains there today. To date, she is the only of the eight surviving dreadnought battleships that the author has personally visited.