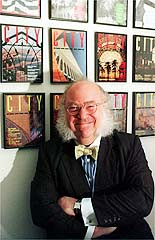 Ever alert to the nuances of culture, Powerline has learned from Myron Magnet — one of the great voices in the blame the hippies school of sociology — that hip-hop is a dangerous force that preys upon the lives of the underclass. (That’s Myron and his wild, flowing mutton chops pictured at right.)

To prove his point, Magnet accomplishes everything you’d expect from a fellow of the Manhattan Institute. He admits he knows absolutely nothing about rap music — describing it, like a proper colonial scout, as “terra incognita” — and then subjects it to an unintentionally hilarious gauntlet of purely formal criticism, juxtaposed with the usual recitations from Conservative Social Science for Dummies. Obligatory “data” from Thomas Sowell and Charles Murray attest to welfare’s dispiriting effects on black economic achievement — presentations that ignore (as always) the crush of deindustialization — while we’re reminded of the shocking fact that that Ice-T once wrote a song about killing police officers and that contemporary artists like 50 Cent and Ludacris write graphic odes to sexual congress.

It’s an utterly predictable and brainless piece that — absent the obligatory references to Don Imus and Mike Nifong (though no mention, I see, of the Scottsboro Boys) — could have been written during the 1992 presidential campaign. Indeed, Magnet insists that the “whole nation needs what’s come to be called a Sister Souljah moment.” (I don’t quite know what such a moment would look like, but whether Magnet approves or not, I suspect it would involve more than a few bodies chained to the tailgates of pickup trucks. I’m quite serious here. The last thing the country needs is a mass epiphany modeled on an act of transparent political demagoguery. Should we hope for a national “Ricky Ray Rector moment” as well?)

Not that Magnet isn’t down with black culture, of course; he just liked it more when people didn’t wear hoodies:

After all, urban black culture wasn’t always like this. Just look through old photos of Harlem and see young men and women dressed up like fashion plates out of Henry James or Thomas Mann, or like Fred Astaire and Ginger Rogers. Look at the black musical celebrities who took such care and made such an impression on people my age: Count Basie, with his elegant mustache, always in a tie and jacket; Duke Ellington, debonair in white tie and jauntily cocked top hat; gorgeous Lena Horne, radiant in her shimmering evening gown—all with the bearing of counts and dukes. What would they make of the gangstas?

Um. Who knows? And more to the point, why would that matter unless we were trying to locate a set of “authentic” voices to mediate between white critics like Magnet and the black masses whom they wish to scold? Although Basie, Ellington and Horne weren’t available for comment (though the latter of the three is still alive), Magnet turns instead to Bill Cosby and Wynton Marsalis, who — no shit! — deliver the expected verdict. I suppose the lesson here is that if America’s black youth would read Fatherhood and watch Ken Burns’ Jazz, they would be embiggened by noble spirits. Or something.

The rest of the piece is a pretty elemental display of non causa pro causa reasoning, the sort of cultural soliloquy we might expect from Bill O’Reilly if Falafel Boy were able to quote William Blake and Plato. I’m not the least bit surprised that the boys at Powerline find these arguments “provocative and thought-provoking.”