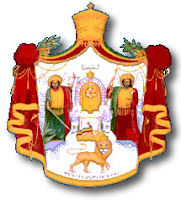 In the late thirteenth century, the son of the slave of an Abyssinian cheiftain deposed the last king of the Zagwe dynasty and married the king’s daughter. Yekuno Amlak claimed to be the sole male descendant of the ancient Kingdom of Axum, which had seen the rise of Christianity in Ethiopia and claimed, itself, to be descended from the union of King Solomon and the Queen of Sheba. Yekuno Amlak’s descendants would expand their reach and hold power in the territory of modern Ethiopia until the 20th century.

In the fifteenth century Portugeuse explorers seeking Prester John, a mythical Christian king of Africa, arrived in Ethiopia and established contact. Both trade and diplomatic relations developed, and the Portuguese assisted the Solomonic kings in their wars against Islamic invaders in the 16th century. Relations between the Ethiopians and the Portuguese later broke down, and Jesuit missionaries were expelled in the 17th century. The next serious period of contact would come in the 19th century when British explorers arrived and developed widespread contacts. Ethiopia fought brief wars against both Britain and Italy, and retained its independence in spite of the suicide of one Emperor in 1868 and the death in battle of another in 1889.

Emperor Haile Selassie ascended to the throne in 1930. In 1935, Mussolini decided to extend 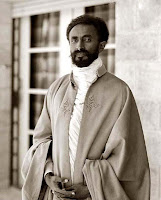 Italy’s colonial holdings by invading and conquering Ethiopia. Although the Ethiopians under Selassie’s command fought well, superior Italian numbers and technology eventually won the day. Selassie fled into exile, and Mussolini declared Victor Emmanuel III of the House of Savoy Emperor of Ethiopia. Selassie did not give up, however, and gave what is recorded as an extremely stirring speech on the floor of the League of Nations. Unfortunately, League sanctions against Italy were quite weak and failed to break Italy’s hold over Ethiopia. In 1941, however, the British Army liberated Ethiopia and returned Selassie to the throne. In 1951, the UN awarded the former Italian colony of Eritrea to Ethiopia, a move which made everyone happy and has had no significant negative repercussions to this very day.

After the war, Selassie became an important advocate of African independence, in 1963 presiding over the creation of the Organization of African Unity. Presumably because of his prominence as an independent African leader, Haile Selassie became the focus of the Jamaican Rastafari movement. Selassie’s purported linkage to Biblical figures probably played no small part in his elevation. Rastafarians apparently view Selassie as God Incarnate and Messiah. The Emperor remained firmly within the Ethiopian Orthodox Church, but made no formal effort to disavow the Rastafari, or even to discourage the movement. In 1966 he visited Jamaica, and he later donated a piece of Ethiopian land for the creation of a Rastafari community. Rita Marley, wife of Bob, atteneded Selassie’s funeral in 2000 (Selassie was exhumed from his initial resting place to be given a full funeral by the Ethiopian Orthodox Church).

Economic dislocation resulting from a severe drought and ideological turn to the left within Ethiopia made the Emperor’s position tenuous by the mid-1970s. Although Selassie’s international profile remained high, his domestic position had slowly deteriorated over the 1960s. On September 12, 1974 Emperor Selassie was deposed by a military coup and imprisoned in an old palace. In August 1975 he died, reportedly of repiratory failure. Some believe that he was assassinated. Rastafarians, by and large, refused to believe that Selassie had died. The coup plotters aimed to put Amha Selassie, Haile’s son, on the throne, but the son refused and the monarchy was abolished in 1975. Amha Selassie accepted the title of “Emperor-in-exile” in 1989, but efforts to reach agreement with Ethiopia’s government about a return and possible restoration broke down in the early 1990s. His son, Zera Yacob, is the current head of the Solomonic dynasty, and lives in Ethiopia. Prospects for a restoration to the throne are uncertain. Amha Selassie actively pursued a restoration of the monarchy to no great effect. Zera Yacob and the rest of the imperial family have remained active in Ethiopian politics, and continue informally to seek some form of restoration.