Welp. After that very kind introduction (though now I may never drink the water ’round these parts), here I am. As Scott mentioned, I’m a rising 3L at an NYC law school. I write about feminism, politics, pop culture (less often), and criminal justice. I have been blogging over at A Bird and a Bottle for just shy of a year. Some of you may recognize me from my guest posting stints here at LGM. But now I’m here to stay. For the next few weeks, I’ll be posting about once a day. After that, I hope to pick up the pace a bit.

So anyway, I better actually blog about something here. I figured for my first post, I’d write about something that doesn’t get a lot of coverage here. Something that will reveal my quirky perspective. Abortion rights. Er….Ok, so maybe that’s a topic familiar to you all. But what would you think if you were driving down the highway (the West Side Highway for you New Yorkers) and you saw this: 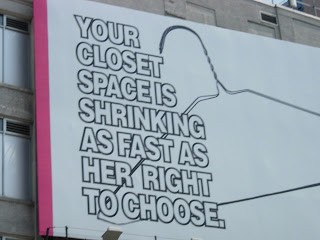 I took this photo yesterday (in a somewhat dangerous driving and shooting maneuver). It’s an ad for Manhattan Mini Storage, the local purveyor of storage spaces that has run a series of cheeky ads on subways and billboards around the city.

After getting over my shock at seeing this hanging over the highway and then after pumping my fists in excitement that a company would choose to advertise its product in this way, I started thinking. Obviously, the company is going for the young, progressive demographic. It’s smart business because that’s a lot of NYC residents. And if anyone has ever seen a NYC closet, you know that there’s a lot of truth to both sides of this ad. But there’s more. What about that dang coat hanger? The coat hanger, because it so powerfully evokes botched back alley abortions, was – as most of you probably know – the symbol of the first wave reproductive justice activists (really, the second wave of feminism). It’s been shunned since then, in part because it seemed out of date and in part because of the problems it presented in terms of framing the abortion debate. Do we really want to be dragging that darn coat hanger back into the thick of this debate? Here, of course, the double entendre is clear. The coat hanger is resurrected not as a symbol of back alley abortions but as a tongue-in-cheek (and, I think, well-meaning) nod to today’s bad politics. And just as a closet is sometimes (often) very small, a hanger is sometimes just a hanger.