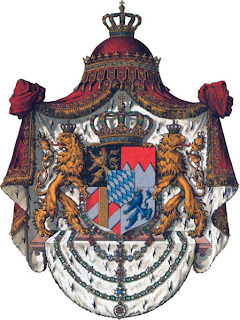 Around the turn of the twelfth century the Counts of Scheyern acquired Wittelsbach Castle, a fortress not terribly far from Augsburg. By the mid-twelfth century the family had relocated to Wittelsbach Castle, and in 1180 were invested as Dukes of Bavaria. The Duchy had previously been ruled by Henry the Lion, who fell afoul of Frederick Barbarrosa when he failed to support the latter’s invasion of Lombardy. Bavaria had existed as a coherent territory since the late 6th century, although of course its borders and population changed over time.

The Wittelsbachs would remain in control of Bavaria until 1918. The territory was periodically divided by German kings, but reunited for good in the 17th century. Two Wittelsbachs served as Holy Roman Emperor, one as King of Germany, four as King of Sweden, and one as anti-King of Hungary between the 14th and 18th century. Joseph Ferdinand was supposed to succeed Charles II as King of Spain, but the death of Charles II and the War of Spanish Succession prevented that from happening. Finally, in 1805, Napoleon Bonaparte abolished the Holy Roman Empire. Duke Maximilian IV Joseph, a close ally of Napoleon, was elevated to King Maximilian I Joseph of Bavaria.

The Wittelsbachs remained closely intertwined with the rest of European

royalty in the 19th century. In 1832, Prince Otto became King of Greece, although he lost that crown in 1862. The mother of Maximilian I of Mexico was also a Wittelsbach. The pressures of politics, royal society, and rulership got to Ludwig II of Bavaria, who became known as “Ludwig the Mad”. Ludwig II was a patron of Richard Wagner, was very popular with the general public, and built a number of memorable castles in Bavaria. However, his considerable eccentricities led to his confinement on June 10, 1886 and, presumably, to his mysterious death three days later. Ludwig II was succeeded by his brother Otto I, who was himself quite mad. Otto I was deposed by law in 1913, and succeeded by Ludwig III, who would preside over the final collapse of the Kingdom of Bavaria.

Defeat in World War I and general dislocation forced the Wittelsbachs to abdicate and flee the country. They returned in the 1920s, but did not reassume power. The Wittelsbachs bitterly opposed the Nazi regime in Germany, and relocated to Hungary in 1939. When the pro-Nazi regime in Hungary collapsed in late 1944, the family was arrested and sent to a series of concentration camps, including Dachau. The family was liberated in late April 1945 by the US 3rd Army.

Among those liberated was eleven year old Franz, who is currently the head of House Wittelsbach. In addition to his pretension to the throne of Bavaria, Franz is at the head of the line of Jacobite succession. Although replaced by George I, House of Glucksburg, the Wittelsbachs never abandoned their claim on the (currently abolished) throne of Greece. Finally, Franz also has a compelling claim on the title King of Jerusalem. Fortunately or no, prospects for reclamation of any of these thrones seem grim. Whatever issues the British may have with the Windsors, the monarchy is more likely to be abolished than turned over to the Jacobite claimant. If the Greeks decide to re-establish the throne, they are far more likely to turn to Constantine II and his heirs than the House of Wittelsbach. Finally, a return to the throne of Jerusalem would presumably require the reconquest and re-establishment of that kingdom. It is not believed that Franz II is contemplating that project at this time.

Trivia: What deposed monarch escaped with $3,000 in cash, four automobiles, and a diamond-and-ruby medal given to him by Stalin?