So Wolfie is now holed up in his office with a shotgun and a year’s supply of Twinkies, and he’s not coming out without a deal, ya stinkin’ pigs.

Let’s review the nut of the charge against him: he ordered the World Bank’s head of human resources to give his girlfriend a promotion and raise worth $193,000.

Let’s review what Wolfowitz made his central crusade at the Bank: refusing debt relief to countries he says are corrupt.

Perlstein also notes that Wolfowitz will be able to purch $375,000 worth of Dapper Dan when he actually does leave the World Bank, a sum that amounts to about two thousand times the daily wage of oodles more than the average worker in Congo makes. [No, I’m not the money guy here….]

Oh, and if Wolfie doesn’t get his way, he’s going to drown and eat this puppy tomorrow morning: 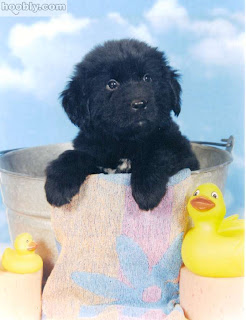