On this date in 1938, the Society for the Preservation and Encouragement of Barbershop Quartet Singing in America sprung forth into the world in Tulsa, Oklahoma. As it turns out, the distinctive barbershop quartet style actually originated from African American popular music in the early 1890s; the use of call-and-response as well as the distinctive “blue notes” are among the obvious markers of the music’s black cultural roots. By the early 20th century, however, white performers had begun parodying the form in minstrel shows and recording the music for popular consumption. James Weldon Johnson explained in his 1925 book on Negro spirituals that

It may sound like an extravagant claim, but it is, nevertheless a fact that the “barber-shop chord” is the foundation of the close harmony method adopted by American musicians in making arrangements for male voices. … “Barber-shop harmonies” gave a tremendous vogue to male quartet singing, first on the minstrel stage, then in vaudeville; and soon white young men, where four or more gathered together, tried themselves at “harmonizing.”

One of the early popularizers of black barbershop style was a white Richmonder — a slaveholder and former Confederate Army artillery private — named Polk Miller, whose Old South Quartette actually employed black performers until 1912. (You can listen to a sample here.) As Miller himself explained, 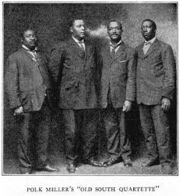 “It was always troublesome to break in new men, but if a Negro had any music in him – and the most of them have – it didn’t take them long to catch on.” When cultural and economic pressures compelled Miller to reorganize the OSQ as a white troupe, he blamed a “certain class of whites in the South, whose ancestors never owned Negroes and who never enjoyed as I did the kind ministrations of the old Negro mammies and Uncle Toms of Antebellum days.”

As barbershop singing became more popular among white performers and audiences, its historical connections to African American culture were obscured, sometimes deliberately and sometimes unthinkingly — one musicologist, for example, mistakenly traced the roots of barbershop music to England, basing his wishful thinking on an entry int eh Oxford English Dictionary. It comes as little surprise, then, that the SPEBSQSA — easily one the most poorly-conceived acronyms in American cultural history — excluded blacks from membership until 1963. Formed to promote barbershop singing, the organization helped spur a revival of the form in the 1940s, from which time the musical form became almost exclusively the domain of whites.