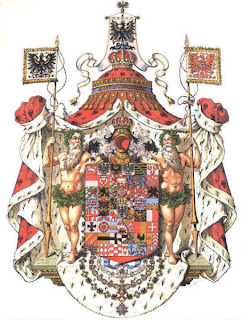 The Hohenzollern are first mentioned in the eleventh century. Holding lands in southern Germany and the Black Forest, the family slowly expanded its territory until it acquired Brandenburg in 1415. The center of Hohenzollern power moved north, and Berlin became the chief city of the realm. The Hohenzollerns took advantage of the decline of the Teutonic Knights to expand into east Prussia. In 1525 Albert I converted to Lutheranism, took the lands of the Teutonic Knights, and assumed the title Duke of Prussia. A later Duke converted to Calvinism, and House Hohenzollern became known for its religious tolerance. Frederick William I, also known as the Great Elector, helped build the army that Prussia would become renowned for in later years. In 1701 Frederick William’s son Frederick declared himself King of Prussia, which helped sever the ties between Prussia and the Kingdom of Poland. Frederick II, or Frederick the Great, used the army to good effect against overwhelming odds in the First and Second Silesian Wars, the War of Austrian Succession, and the Seven Years War. Frederick the Great also patronized Voltaire and Kant, and granted Jean Jacques Rousseau refuge from France.

In the 1860s Otto Von Bismarck, Chancellor to King Wilhelm I, engineered wars against Denmark, Austria, and finally France. Victory in the last catalyzed German nationalism,

bringing Wilhelm the title Emperor. After the ninety-nine day reign of Frederick III, Wilhelm II assumed the throne. Although Wilhelm II wasn’t the only source of Germany’s militaristic approach to the international system, he certainly didn’t help the situation. In 1890 he fired Bismarck, and through the last decade of the nineteenth and the first of the twentieth he lent heavy support to German plans for colonial and naval expansion. Trauma during birth left Wilhelm II with a withered arm and may have caused some brain damage. Nevertheless, Wilhelm cannot be held solely responsible for World War I; there’s enough blame to spread around liberally.

Germany’s situation began to deteriorate rapidly in November 1918. With revolution in the air and the Reichswehr at the breaking point, pressure grew on Wilhelm to abdicate. Although he realized that holding that Imperial crown might become untenable, he hoped and believed that it would be possible to remain King of Prussia. One can sympathize with this feeling; having lost the war, Wilhelm at least hoped not to undo all of the work that his family had accomplished over the last five centuries. Nevertheless, under the advice of Paul Von Hindenburg, a committed royalist, Wilhelm abdicated both crowns and fled to Holland. Wilhelm II’s most significant redeeming quality was a loathing of Adolf Hitler, although he did send Hitler a congratulatory note after the conquest of France in 1940. Of Nazi policy toward the Jews he may have written “for the first time I am ashamed to be a German,” although the source of that quote remains questionable. Although the Allies had requested the Wilhelm be turned over for prosecution, Queen Wilhemina of the Netherlands refused. Wilhelm II died on June 4, 1941, and was given an honor guard of German soldiers, an act which almost resulted in the firing of a general by an angry Adolf Hitler. Although Hitler wanted to bring Wilhelm’s body back to Berlin for a state funeral, the former Emperor had explictly provided that his body not return to Germany prior to the restoration of the monarchy.

The actions of Wilhelm II should not prejudice us against Georg Friedrich, the current head of House Hohenzollern. He seems like a very nice young man. Great great grandson of Wilhelm II, Georg Friedrich does not claim the imperial throne, but does use the title Prince of Prussia. He served two years in the Bundeswehr, and has travelled extensively. An anglophile like his great-great-grandfather, he finished college in the United Kingdom, later studying business economics in Germany. Chances for restoration appear extremely grim, as there is almost no sympathy for the monarchy in the contemporary German political scene. Georg Friedrich is, however, 150th in line to the British throne.

Trivia: What deposed monarch is also an Olympic gold medalist?