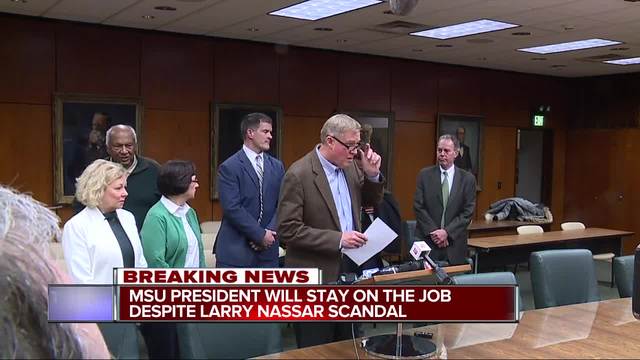 Over the past three years, MSU has three times fought in court — unsuccessfully — to withhold names of athletes in campus police records. The school has also deleted so much information from some incident reports that they were nearly unreadable. In circumstances in which administrators have commissioned internal examinations to review how they have handled certain sexual violence complaints, officials have been selective in releasing information publicly. In one case, a university-hired outside investigator claimed to have not even generated a written report at the conclusion of his work. And attorneys who have represented accusers and the accused agree on this: University officials have not always been transparent, and often put the school’s reputation above the need to give fair treatment to those reporting sexual violence and to the alleged perpetrators.

Even MSU’s most-recognizable figures, football coach Mark Dantonio and basketball coach Tom Izzo, have had incidents involving their programs, Outside the Lines has found.

Since Dantonio’s tenure began in 2007, at least 16 MSU football players have been accused of sexual assault or violence against women, according to interviews and public records obtained by Outside the Lines. Even more, Dantonio was said to be involved in handling the discipline in at least one of the cases several years ago. As recently as June, Dantonio faced a crowd of reporters who were asking questions about four of his football players who had been accused of sexual assault. Six questions in, a reporter asked Dantonio how he had handled such allegations previously.

On Thursday, Outside the Lines reported that MSU officials in 2014 did not notify federal officials that the university had dual Title IX and campus police investigations of Nassar under way even though federal investigators were on campus that year scrutinizing how MSU dealt with sexual assault allegations. The Outside the Lines report also found that MSU administrators still have not provided to federal officials all documents related to the Nassar allegations.

In her resignation statement, Simon was defiant, saying that as “tragedies are politicized,” someone had to take the blame. Further, she praised her campus police department’s handling of Nassar-related matters and stated unequivocally that “there is no cover-up.”

Yet former Michigan State sexual assault counselor Lauren Allswede, who left the university in 2015 over frustrations about how administrators handled sexual assault cases, told Outside the Lines that MSU administrators’ entire approach to such cases has been misguided for years. The biggest issue? Complaints involving athletes were routinely investigated and handled by athletic director Hollis’ department, and sometimes even coaches, she says.

“Whatever protocol or policy was in place, whatever frontline staff might normally be involved in response or investigation, it all got kind of swept away and it was handled more by administration [and] athletic department officials,” says Allswede, who worked at MSU for seven years. “It was all happening behind closed doors. … None of it was transparent or included people who would normally be involved in certain decisions.” . . .

Allswede told Outside the Lines that about seven years ago, an attorney from the university’s general counsel’s department came to her office to try to reassure her that coaches were taking allegations of sexual violence seriously. Allswede says the attorney told her how Dantonio, the football coach, had dealt with a sexual assault accusation against one of his players: He had the player talk to his mother about what he had done.

“That did not reassure me at all,” Allswede says. “There’s no guarantee that that had any effect, any help, whatever.”

Much more at the link.

This of course is not a problem limited to MSU. Here is an outline of a piece I’m writing on this issue:

The invidious effects of big time college sports and the (closely related) economics of major research universities in the new gilded age are at the core of the Michigan State scandal.

The central point is that Michigan State’s obsession with sports success is the key to understanding both why Nassar’s reign of terror lasted so long, and why in recent years the department turned a blind eye toward or actively covered up sexual assaults by numerous athletes from the two teams responsible for funding the athletic department, football and men’s basketball.

Despite becoming a major research university in its own right, MSU as an institution continues to manifest a marked inferiority complex relative to its richer and more prestigious in-state rival, the University of Michigan. (I am commenting on this from the perspective of someone who grew up in Michigan, and who has many friends and family members who attended each of the schools).

An important form of compensation for the institution’s alumni and administration (which, for fundraising purposes, is carefully attuned to alumni concerns) has been success in athletic endeavors, especially in the major revenue sports, football and men’s basketball.

In recent years, and especially during President Lou Anna Simon’s term, MSU’s athletic triumphs have helped drive a very successful enhancement of the school’s finances. During Simon’s presidency, the school’s endowment has more than quadrupled, increasing from $592 million in 2003 to $2.7 billion in 2017. Over that time, the school went from having the 77th to the 33rd largest endowment of any American college or university: the steepest such ascent of any school during the relevant period.

The school’s board of trustees, which resisted calls for Simon’s ouster until public pressure became too overwhelming, is dominated by former MSU football and basketball players, one of whom went on to become the football team’s coach. Four of the board’s eight members fall into this category, and a fifth, Joel Ferguson, is infamous for statements that make it clear his primary criterion for whether the school and the school’s president are doing well is athletic success.

For example, when commenting on the firing of a football coach who had improved graduation rates, Ferguson said: “And the other thing, let’s get real, too. People talk about grade-point (averages). Anytime you hear people talking about grade-points, you know they’re not winning. We can dance around all these things, but just be real.” The day before Simon announced her resignation, Ferguson was literally laughing at the idea that she should step down, given how much money she had raised to build a new basketball arena: “I mean, when you go to the basketball game, you walk into the new Breslin, and the person who hustled and got all those major donors to give money was Lou Anna Simon.”

Simon herself is apparently a passionate fan of the school’s teams. Her contract entitles she and her husband to a remarkable number of sports-related lifetime perks, including:

– The option to buy up to four men’s basketball tickets in the same location she currently has seats.

– Parking pass for all home sporting and cultural events.

James Finkelstein, the leading expert on presidential compensation in higher education, comments: “We rarely see such benefits in any contracts. What is extremely unusual about these benefits is that so many of these are related to sporting events.”

In addition, one reason the institution turned a blind eye to Nassar’s predations for so long may have been the perceived prestige in athletic circles associated with the school’s employment of U.S. Olympics gymnastics team doctor. The school publicized this connection on numerous occasions, and, in the wake of Nassar’s exposure, emphasized the administration’s shock at discovering that such an eminent and celebrated figure in his field could have been responsible for such crimes.

The structural situation at MSU – an obsession with sports success, a closely connected obsession with fundraising, and a governing board that shares and intensifies those obsessions while featuring no discernible qualifications in regard to regulating a research university (none of the board members have ever worked in higher education, and only one, a lawyer, has an advanced degree) — is a very common one in contemporary American higher education. The scandal at MSU should be a cautionary tale for the many institutions that resemble Michigan State in more ways than one.