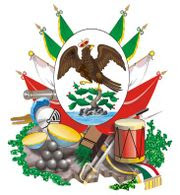 By Robert Farley
|
In dangerous professions , mexico , monarchs
|
On March 18, 2007
In the wake of the Mexican War of Independence, General Agustin de Iturbide came to power as head of Mexico’s new ruling junta. Originally an officer in the Spanish Army, General Iturbide had switched to the rebel side in 1820, a defection that proved important to the cause of Mexican independence. Iturbide defected, in part, […]
Continue Reading