UK lawmakers rejected Theresa May’s Brexit deal for a third time on Friday, likely killing it off for good and plunging the country further into political uncertainty.

The defeat of the Prime Minister’s withdrawal agreement by 344 votes to 286 came on the same day that Britain was originally supposed to leave the European Union, and left the path forward on Brexit unclear.
The rejection of May’s plan raises the chances of a lengthy delay to Brexit or Britain crashing out of Europe without a deal on the new deadline of April 12.
May had offered to resign if Parliament passed her deal, but ultimately she was unable to persuade enough MPs to back a plan they had resoundingly rejected in two previous votes. 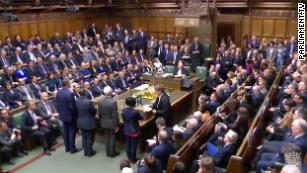 Brexit deal defeated for third time: Live updates
It may now rest on British lawmakers to find a way out of the impasse when they run a second vote on alternatives to May’s deal on Monday.