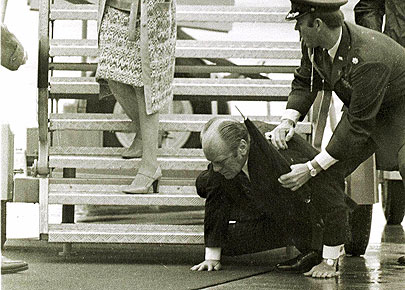 I spent the weekend in Michigan, where I was chairing a plenary session at the American Federation of Teachers Higher Education Conference. As I am always one to take advantage of opportunities to fulfill my obsessions (yes, there may be some Michigan graves in your future), I intentionally scheduled a late flight last night so I could spend yesterday driving out to Grand Rapids to visit the Gerald Ford Museum and taste a couple of that town’s 497 breweries (I went to Harmony and Founders; why Grand Rapids of all places in the beer capital of the Midwest is a mystery to me).

Presidential museums/libraries are very interesting places. They are nominally run by the National Archives and the actual libraries are. But the museums are heavily influenced by the private supporters of the president. This means that they are largely exercises in hackwork and apology, even for presidents I don’t hate. The message of the Carter Museum is that Carter was the human rights president because he told Argentina to stop throwing people out of airplanes. The message of the George H.W. Bush Museum is that he got us over the Vietnam Syndrome thanks to his leadership over the great menacing Saddam Hussein and, to a lesser extent, Manuel Noriega. The Nixon Museum is extra special. Over time, the partisanship fades away with the generation of presidential supporters behind the museum and thus the National Archives can do more. When I visited the Nixon a couple of years ago, this was just beginning. The Watergate section had been reintrepreted from actively defending Nixon’s innocence to text that was so opaque that no one without immense preexisting knowledge of Watergate could understand it. Whether this is an improvement, I’m not sure. I understand more changes have been made since. But when I was there, a lot of the original exhibits were there, discussing how Nixon saved the police from the horrors of the Miranda decision, among other insanity. Between that, the display of the rock Barry Goldwater sent Nixon because he claimed it was a profile of Nixon’s head, and the helicopter Nixon fled the White House on that you could tour and that still had the original blue shag carpet, this was heaven.

The Ford is less out of control in no small part because Gerald Ford is just less an absurd figure. It’s basically all about his fiscal conservatism saving us from government spending. Yet there are still some classic bits and artifacts here for the visitor. Here’s 5 images I took yesterday. These may not sum up the entire museum, but it’s a start.

It should be federal law to construct museum exhibits around inflation and unemployment numbers pic.twitter.com/wEBxiWtZYO

And this, one of the most amazing artifacts I have ever seen.

The actual staircase used by people fleeing the embassy in Saigon on the last day before the North Vietnamese takeover. pic.twitter.com/3kV9GoETUT

That one blew my mind. That’s a pretty intense staircase! Unfortunately, one could not climb it and pretend you were escaping Saigon in 1975. No fun.

And a bonus one, with 1976 campaign horrors.

I'm not sure which of these items is more horrifying pic.twitter.com/4nHlLmQ7jy

I can say, sadly, that the bathrooms at the Ford Museum do not have any of that Carter toilet paper.