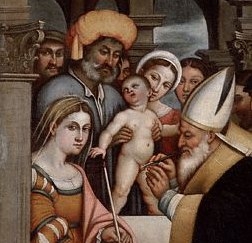 According to Christian tradition, January 1 marks the eighth day of Jesus’ life. Among other things, it is the day on which — following Jewish custom — the Son of Man would have been circumcised. And while the rest of his body would presumably have ascended to heaven on the third day after his gruesome execution, early followers believed it quite possible that he had neglected to retrieve his long-excised foreskin before taking a seat at his father’s right hand.

For medieval and early modern Christians, Jesus’ foreskin remained an object of peculiar veneration, with as many as eighteen different reliquary nubs of flesh competing for attention and honor. Charlemagne allegedly offered one to Pope Leo III as a gesture of gratitude for being crowned emperor in 800. Another, purchased from a vendor in Jerusalem at the end of the 11th century, was brought back to Antwerp as a souvenir from the first Crusade.

Nearly 300 years later, St. Catherine of Siena purported to wear the foreskin as a ring, while the 13th century Austrian mystic Agnes Blannbekin had an even more unusual relationship with the sacred relic. By Agnes’ own account, she tasted the carne vera sancta — the “true and holy meat” — numerous times during communion. As she revealed to an anonymous Franciscan scribe, she had long pondered the whereabouts of Christ’s foreskin until she experienced a revelation one year on the Feast of the Circumcision.

And behold, soon she felt with the greatest sweetness on her tongue a little piece of skin alike the skin in an egg, which she swallowed. After she had swallowed it, she again felt the little skin on her tongue with sweetness as before, and again she swallowed it. And this happened to her about a hundred times . . . . And so great was the sweetness of tasting that little skin that she felt in all limbs and parts of the limbs a sweet transformation.

Like most Catholic relics, the Holy Prepuce was believed to possess extraordinary powers, including (not surprisingly) the enhancement of fertility and sexuality. And so in 1421, the English King Henry V retrieved one of the rumored foreskins from the French village of Coulombs to aid his wife, Catherine of Valois, in the delivery of their first son. Alas, while the relic may have helped bring the future King Henry VI into the world, it did his father little enduring good. The king died less than a year later, felled by dysentery.

The Reformation helped to undermine Catholic traditions of all kinds, including its centuries of speculation on the provenance and status of Christ’s foreskin. In 1900, the Church issued an edict than any discussion of the Holy Prepuce would result in excommunication and shunning; since the Vatican II reforms of the 1960s, Roman Catholics have not officially recognized the Feast of the Circumcision, though it continues to be observed in some Anglican and most Lutheran churches. The last public appearance of one of Jesus’ alleged foreskins took place in the Italian village of Calcata, which had hosted the tip of the Redeemer’s penis since 1557. Residents of Calcata and Catholic pilgrims continued to celebrate the Feast of the Circumcision until 1983, when thieves absconded with the foreskin and the jewel-encrusted box that contained it. Neither it nor any other alleged foreskins have ever turned up.