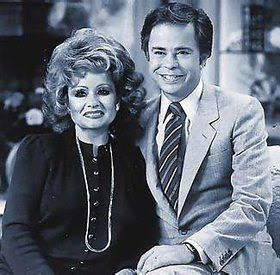 (Spurred by popular demand — that is, a single query via Facebook — I’m resuming this series after nearly a year of neglect…)

James Orson Bakker, one of the greatest religious frauds in US history, turns 68 today. Bakker and his first wife, the inimitable Tammy Faye, spent a quarter-century building and then destroying an enormously profitable televised ministry known as the Praise the Lord network and a hilariously weird Christian theme park called Heritage USA. PTL immolated in early 1987 when a confluence of sex and fund raising scandals ruined Bakker’s gimmick and eventually earned him a 45-year prison sentence for mail fraud, wire fraud and conspiracy. (The sentence was later voided; after re-sentencing, Bakker served less than five years before receiving parole in 1994.)

Before his magnificent collapse, Bakker and his wife helped define the cultural grotesquery of the 1980s. The keystone of the PTL empire was the Bakkers’ variety show, a gibbering circus of musical bathos, inane religious chatter and unselfconscious, hyperbolic weeping from Tammy Faye, whose near-daily fits of ecstasy provided some of the most inspired television of the decade. Tammy Faye wept because Jesus loved her; she wept because Jesus died for her sins; she wept because her beloved dog Chi Chi died from an overdose of lima beans. When God neglected her pleas to raise Chi Chi from the dead, Bakker wept again before announcing to her viewers that Chi Chi was a “naughty little dog” who more or less deserved to die.

Meantime, Tammy Faye’s husband Jim preached the gospel of prosperity, a Ponzi theology rooted in the belief that God will reward the faithful with material wealth and financial success — provided that they first contribute to the material and financial success of their ministers. By 1986, the Bakkers had seemingly harvested the fruits of their own teachings; that year, the PTL empire earned just shy of $130 million from its numerous businesses, with the Bakkers themselves pocketing over $1.6 million in salary and compensation. Heritage USA — Bakker’s $150 million theme park south of Charlotte, North Carolina — drew millions of visitors each year, including many who had paid $1000 each for “Lifetime Partnerships” that earned them several days of free lodging in the park’s 500-room luxury hotel. By 1987, PTL had sold 165,000 of these memberships, claiming that they would be used to fund the construction of new time-share units. Most of those earnings, however — along with seemingly everything the organization siphoned from its middling faithful — simply disappeared into a hole. By the end, PTL was earning $4.2 million each month and spending nearly twice that amount. At several points, PTL’s operating expenses were paid from employee retirement accounts. Lacking any meaningful accounting processes, PTL became a crematory for the donations offered up by the Bakkers’ unwitting constituents.

On March 18, 1987, Bakker resigned from PTL amid rumors that he had paid more than $100,000 in hush money to Jessica Hahn, a former church secretary Bakker had slept with — or raped, on Hahn’s account — in 1980. In his resignation statement, Bakker declared that he had been “wickedly manipulated by treacherous former friends” who “conspired to betray me into a sexual encounter” with Hahn. Jerry Falwell subsequently assumed control of PTL. Internal audits and criminal investigations soon revealed layers of fraud that seem, in retrospect, oddly unimpressive by the standards set by government and business in the new millennium.

During Bakker’s several years in prison, he had time to read the Bible from cover to cover for the first time. To Bakker’s surprise, he discovered that it didn’t have too many congratulatory things to say about wealth.