Erik Loomis and I have embarked on a project to evaluate George Herring’s new book, From Colony to Superpower. Herring is a well-respected historian of the Vietnam Era, and has produced a roughly 900-page book on the history of American foreign policy. Each Sunday, Erik and I will comment on a new chapter of the book. I’ll be reading as a political scientist, focusing on how the development of US foreign policy fits into extant theories of international relations. Erik will be reading the book as a historian, with an eye toward how Herring integrates modern scholarship on American foreign policy into the overarching narrative. Perhaps more interesting than the academic element, we’ll also take the opportunity discuss interesting and worthwhile stories about American foreign affairs, in particular those that have fallen out of the public memory. The book has twenty chapters, so we expect to keep this up for twenty Sundays. We’ll be responding to each others points in posts throughout the week, and of course in the comments sections of both blogs. Anyone who wants to join in is welcome, even if you don’t plan to read the book. We’ll take care to include responses to posts and comments in our responses to one another. If you have the book and would like to participate, drop one of us a line. Erik has the first post on the first chapter; go read it now.

Herring makes what amounts to a second image reversed argument about the impact of international factors on the formation of American political institutions. A second image argument (using the terminology developed by Kenneth Waltz in Man, the State, and War) derives international outcomes from domestic factors; for example, democracies don’t go to war against other democracies. Second image reversed derives internal characteristics of states from the international system. Herring makes the case that much of the drive towards centralization in the early Republic came from the need to interact with the international system. While security was one concern (the Founders were concerned about Native Americans, the British, and the Spanish), commerce, according to Herring, was a larger consideration. Pursuit of an open commercial policy was one of the justifications for the Revolution, and expectations were that the new nation would enjoy good commercial relations with Europe. It turned out, however, that coming to agreements was difficult without a central legislative and executive authority capable of negotiating and regulating such agreements. This is a clear cut case of institutional isopomorphism on the international stage. In order to deal with the states that then existed, the United States needed to become like them. The international system creates units that mirror already existing units. There’s both a realist and a constructivist account for this, with the realist case focusing on security concerns, and the constructivist case concentrating more on social and commercial issues. Both cases find some support in Herring’s argument, although I tend to find the latter more satisfying.

As Erik points out, the introduction and first chapter of this book probably look different than they would have fifteen years ago. Herring makes clear that the Founders were, in a very important sense, genuine revolutionaries; they expected the United States to behave differently internally and externally than the nations of Europe. Moreover, the Founders believed that the United States would play a revolutionary role in world politics, eventually if not immediately. Early American efforts at diplomacy with Europe were, it’s fair to say, uneven and often a bit naive. The colonists shared the British prejudice towards continental powers, especially Catholic ones, even as they sought the military and commercial aid of France and Spain. It’s still wrong to make a leap connecting the Founders to modern-day neoconservatism; the Founders on the whole had a profoundly different conception of the relationship between democracy and force than is held by the neoconservative right. Nevertheless, the idea that the United States would play and unique and crucial role in world politics is not new to American political thought.

I’m not sure that I can agree with Erik’s argument that the Revolution was a mistake. Herring convincingly argues that the interests of the colonies and of England diverged significantly in the latter decades of the 18th century. The United States wasn’t able to achieve everything that it wanted through independence (in particular, the commercial sector didn’t grow as anticipated), but the nation was able to survive and expand without the protection of the British Empire. The expansion point is key; Britain and the colonies disagreed bitterly over proper relations with the various Indian nations. The British preferred a far more conciliatory policy than the colonists were willing to entertain. This disagreement doesn’t put the Founding generation in a particularly good light, but it nevertheless represented a serious dispute that would have proved problematic even if the various tax and autonomy issues had been solved. Also, the Revolution limited (but did not fully preclude) American participation in the world war that last from 1790 until 1815. The avoidance of such entanglements was another justification of the Revolution.

Erik further makes the case that slavery in North America would have been abolished earlier in the absence of the Revolution. I’m not sure that I can agree with this, either. To keep the colonies part of the Empire, some power-sharing arrangement would have been necessary. The population of the United States was 16.2 million in 1838, while the population of Great Britain was a touch over 25 million. Even allowing that a considerable portion of that population was enslaved, and that the population might not have grown to the same extent had the colonies remained part of the Empire, this represents a free white population of a scale dramatically different than the other elements of the Empire. The continued inclusion of the colonies within the British Empire would have necessarily transformed the character of the Empire, opening some possibilities and foreclosing others. In particular, the continued existence of a large, white, and wealthy slaveholding class in the North American colonies would have made it much more abolition in the British Empire a much more dodgy prospect than it ended up being. Moreover, the slaveholding class was willing to fight to protect slavery in 1860; there’s no reason to think that would have changed if the relationship between the Empire and the colonies had remained intact.

Finally, I think that a movie or HBO miniseries about John Jay is long overdue. He seems to have had entertaining adventures in France and Spain, and was of course both the “Forgotten Federalist”, and the first Chief Justice of the Supreme Court. A quick perusal of Wikipedia and IMDB reveals not a single instance of Justice Jay appearing in film; this is surely a crime against cinematic history. 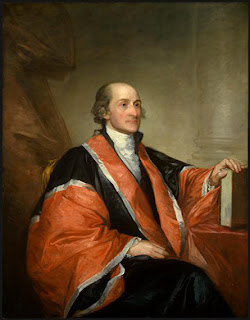 Any thoughts on casting?