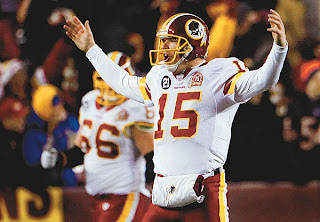 I confess to being a little obsessed with Todd Collins. Who is Todd Collins you may well ask? At present, he a backup QB for Washington’s NFL team, where he is being paid $3 million per season over the next three years to not play football.

Collins has, I believe, the unique distinction of spending an entire decade in a major professional sports league without ever seeing a single minute of meaningful action. During this time he was paid approximately $8 million to not play football.

From the end of 1997 until December of last year, Collins appeared in a handful of games (he had no less than four seasons in which he literally never stepped onto the field once), but all his appearances were limited to very brief garbage time play in the last few minutes of blowouts (he threw a total of 27 passes over the course of ten years, i.e., an average of one every five months).

Then last season a series of injuries thrust him into the spotlight. He started Washington’s last four games, and played very well, leading the team into the playoffs. For this he was named NFC Offensive Player of the Month, and rewarded by Daniel Snyder, Washington’s spendthrift owner, with a three-year $9 million contract. He then returned to holding a clipboard on the sidelines. He is, in my view, a genuine American hero.

This is his blog.* Appropriately, it hasn’t been updated since March.

*Not really. It’s a parody , proving I suppose that there’s no fetish, no matter how exotic, that doesn’t have it’s own internet site (the purported live blogging by Collins during his games last December is actually sort of funny).