So regular readers might find this hard to believe, but I’ve had pretty miserable luck in recent years with the animals who live under my roof. About four years ago, Greta — the older of our two Newfoundlands — lost her mind and required several months of heavy medication, hypnotherapy and Jungian psychoanalysis before she ceased being afraid of nearly every spot in the house. She’s no longer medical supervision, but most days she still seems confident that the house is crawling with invisible dog murderers.

The next 18 months were more or less uneventful in the pet department, but in October 2006 our beloved cat Herbert contracted diabetes and suffered through nearly a year of fruitless insulin treatment before leaving us last May. Two months later, Hazel — the younger and less melancholy of our Newfs — blew out the meniscus in her left knee, an injury that required costly surgery and an extended period of rehab, not to mention a shaved leg and a humiliating plastic hood to thwart her efforts to gobble her own wound. By October, though, she had fully recovered and was again ambling through the neighborhood, barking at harmless strangers and befouling yards and driveways like the town drunk she’d no doubt be if she were human.

Today, unfortunately, we submitted Hazel to the surgeon’s knife for the second time in seven months, this time to repair a partially torn cruciate ligament in her right leg. The alternative to surgery would have been a lifetime of progressive arthritis, as her body crudely dumped calcium into her knee to substitute for a failing ACL. Treatment for that would have required daily anti-inflammatory medication, an expense of roughly $1000 a year that could just as well have been spent on a reconstructed knee. 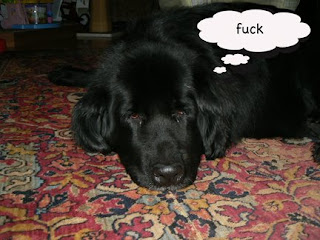 Euthanasia — of either the medical or Old Yeller variety — was not something we could contemplate for a five-year-old dog whom we continue to love in spite of her tremendous character flaws.

I’m pleased to report that the surgery went well, and Hazel’s prognosis for a full recovery is outstanding.

Meantime, we’ve added three new goldfish to the household zoo. And though my daughter loves them and loses her grapefruit-sized toddler mind every time she sees them, the fish should not expect any heroic measures to be taken on their behalf.