On this date in 2001, George Walker Bush formally ascended to the office of President of the United States. In that day’s inaugural address, speechwriter Michael Gerson — addressing the nation via the new president — announced that

America remains engaged in the world by history and by choice, shaping a balance of power that favors freedom. We will defend our allies and our interests. We will show purpose without arrogance. We will meet aggression and bad faith with resolve and strength. And to all nations, we will speak for the values that gave our nation birth.

Toward the conclusion of the address, Gerson added that President Bush would “live and lead by these principles: to advance my convictions with civility, to pursue the public interest with courage, to speak for greater justice and compassion, to call for responsibility and try to live it as well.”

“In all these ways,” Bush continued, “I will bring the values of our history to the care of our times.”

A mere 352 years earlier, Charles I of England — an insufferable, arrogant prick whose rule was a ceaseless national catastrophe — was hauled before a special Parliamentary court. There, he faced charges of developing “a wicked design to erect and uphold in himself an unlimited and tyrannical power” and “to overthrow the Rights and Liberties of the People[.]” The indictment continued:

All which wicked designs, wars, and evil practices of him, the said Charles Stuart, have been, and are carried on for the advancement and upholding of a personal interest of will, power, and pretended prerogative to himself and his family, against the public interest, common right, liberty, justice, and peace of the people of this nation, by and from whom he was entrusted as aforesaid. 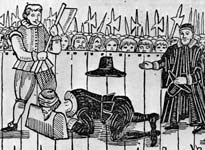 By all which it appeareth that the said Charles Stuart hath been, and is the occasioner, author, and continuer of the said unnatural, cruel and bloody wars; and therein guilty of all the treasons, murders, rapines, burnings, spoils, desolations, damages and mischiefs to this nation, acted and committed in the said wars, or occasioned thereby.

The week-long trial did not go well for the king.