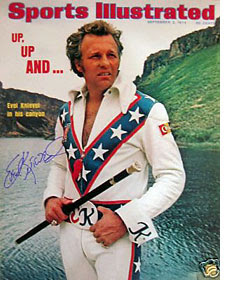 A lot of folks have asked me over the last couple of years why I named that other site after Evel Knievel. I don’t have an especially good answer, except to say that the name made for a good pun and was, for all kinds of reasons, a better choice than “Kennedy’s Magic Johnson.” I never owned an Evel Knievel lunchbox, and I was always too much of a coward to try and emulate his various stunts on the crappy bike I rode as a kid.