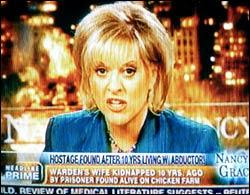 Depending on whom one asks, Nancy Grace broke free from her leathery shell either 47 or 49 years ago today. Sharing CNN’s primetime bandwidth with fellow performance artist Glenn Beck, Nancy Grace is best known as cable news’ foremost advocate for missing white girls, whose assorted misfortunes are reflected back to the world through Grace’s oceanic narcissism.

Official legend tells us that Grace was propelled into the world of criminal justice by the murder of her betrothed, who was cruelly dispatched in 1979 by a vicious stranger, a repeat offender whose attorneys then manipulated the system in all the ways that make legal populists quake with fury. By unnecessarily drawing out his trial, confusing the jury, and then spinning and endless weave of post-conviction appeals, these defense lawyers — members of a professional breed that Grace would one day compare to “guards at Auschwitz” — heartlessly victimized Grace and her dead lover’s family for years to come.

Unfortunately, the actual details of Keith Griffin’s shooting death were insufficiently prosaic for Grace, who somehow forgot that the accused — who was not a random killer but a former co-worker of Griffin’s — actually confessed to the murder that very evening and was convicted by a jury who deliberated less than a day before returning their verdict. The system, far from failing Griffin and his family, actually functioned as intended. None of this, however, has forestalled Grace from devoting her career to reinforcing right wing folklore about the cruel, offender-friendly imbalances of criminal law, which — among other scandalous inconveniences — prevents accused criminals from being nibbled to death by raccoons or tossed from bridges in canvas sacks.

Much more could be said of Grace, a truly vulgar specimen who has quite literally badgered guests into an early grave. But for those who regard Nancy Grace with the contempt she deserves, the following clip may well stand as the greatest moment in television history.

. . . except that it’s apparently a fake. What the hell? I can’t believe someone would post a doctored video on the internet. Does this sort of thing happen often? Sheesh.