Among the many, many disturbing moments in Sicko (and there were many), of the most enraging for me was among the least graphic: the moment when Moore indicates, with thought bubble-like images, how much money each of several elected officials has taken from the healthcare industry. The very same industry that profits from keeping people as far away from adequate health care as possible. The bottom line is that a lot of people have taken a lot of money, not the least of which is Hilary Clinton.

Which is why I was not at all surprised (though again, disappointed), to see in yesterday’s Times that Hilary is certainly not the only one in the Democratic presidential field to be taking money from the insurers and pharmaceutical companies with one hand while holding sick babies and promising universal single payer healthcare with the other, though she has amassed the most. 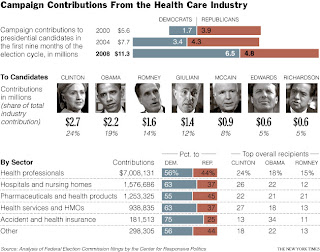 According to the Times article (source of this graphic):

Mrs. Clinton received $2.7 million through the end of September, far more than Mitt Romney, the Republican who raised the most from the health care industry, with $1.6 million. The industry’s drift in contributions toward Democratic candidates mirrors wider trends among donors, but the donations from this sector are particularly notable because of the party’s focus on overhauling the health care system.
…
Among all the candidates in both political parties, Senator Barack Obama of Illinois is the No. 2 recipient of donations from the health care industry, having raised about $2.2 million, according to campaign finance records.

I want to choose a democratic candidate and wholeheartedly throw my support behind her or him. But with figures like this, whose campaign promises of a healthier America can I take to the bank?