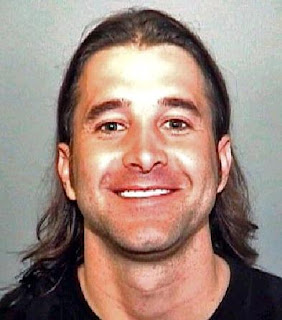 All, I regret to report, share their August 8 birthdays with Anthony Scott Flippen, known to most of the world as “Scott Stapp” (pictured here in his latest mug shot, taken in May after he threw a bottle of Orangina at his wife). As the alpha wanker of post-millennial modern rock, Scott Stapp — vocalist and proprietor of the ill-fated “grease mullet” — helped propel his band, Creed, to implausible heights of rock superstardom. Produced with the same spark of insight that spawned Chicken Soup for the Soul and its innumerable spinoffs, each Creed album was an opera of bathos and pretension, each music video a chance for Stapp to imagine himself nailed to a cross. By sheer coincidence, Stapp’s many non-admirers also wished to see him impaled on a slab of wood — a rare moment of congruity, perhaps, but one worth noting.

Although Stapp self-consciously molded his public image as a contemplative and earnest soul, he rarely distinguished himself from the mediocre conduct of the average short-term male rock celebrity. In August 2002, two years before Creed dissolved into a pious mist, USA Today Weekend ran a fawning profile of Scott Stapp in which he shared, among other things, his enlightened sensitivities on matters of gender, celebrity and power. As Stapp explained in a moment of Christ-like humility,

I meet a lot of women, and let’s just say I have numerous friends. But I’ve heard some crazy stories about what certain artists have done with fans. You’ve got to have a little compassion for their hearts. I mean, one night there was a 15-, 16-year-old girl in the audience. She gave me [a lewd come-on] sign. She’s just a little girl, and she thinks that’s what rock ‘n’ rollers want. I went to her and said, ‘Honey, that’s not what men want.’ I don’t know what compels me to do that.

In 2006, an improbable sex tape surfaced involving Scott Stapp, Kid Rock and four young Florida women, one of whom later sued Stapp for defamation of character and invasion of privacy. In the trailer to the film (whose release has been stalled by a most fortunate court injunction), Stapp was heard to remark, “Hey, it’s good to be The King,” quoting none other than Mel Brooks as the plaintiff attended to his rock star compulsions.