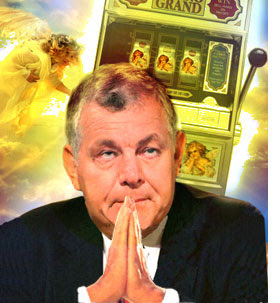 “I’ve gambled all my life and it’s never been a moral issue with me. I liked church bingo when I was growing up.” [1]

Erected upon a sturdy moral pedestal of church-sponsored wagering, the massively-sculpted William John Bennett — who celebrates his 64th year of abject hypocrisy today — slowly ascended the ranks of the world’s least successful gamblers. As he spent his life exhuming nearly every form of human iniquity, scolding his fellow citizens in print and over the airwaves for their collective departure from the virtuous path, Bennett devoted greater and greater sums of his annual income to the pursuit of fleeting, empty joy. Pissing away literally millions of dollars at the Bellagio and Caesar’s Boardwalk Regency among other sinkholes for the less-rich and less-famous, Bennett’s magnificent appetite for the slot machines and video poker terminals caused him no evident shame as he commanded $50,000 speaker’s fees and earned stupefying royalties on books he most likely did not write. In doing so, Bennett ignored the sage advice of the Proverbs, from which he might have learned that “dishonest money dwindles away.”

Bennett’s obscene gambling habit, of course, only accentuates the narrow scope of his commitment to “virtue.” Throughout his career, Bennett has advocated or helped implement policies — especially the so-called “war on drugs” — that are even more wasteful than his private vices and which, moreover, lack even the rudimentary elements of justice. As well, his vision of righteousness seems not to include factual accuracy, as Bennett has demonstrated when erroneously claiming, for instance, that the average lifespan of a gay man in America is only 43, or that crime rates might be reduced by higher abortion rates within the black community. Nor can Bill Bennett find room in his mighty, virtuous heart for journalists who expose the legal and moral transgressions of their own government (at least when the government is dominated by his co-religionists in the Republican party). These sorts, he believes, should be tossed into prison — along with the minor drug offenders and carriers of AIDS whose detention Bennett has also advocated from time to time.