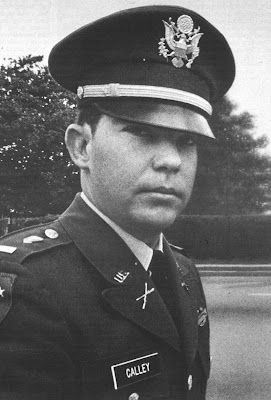 These victims died at the hands of soldiers from Charlie Company, 1st Battalion, 20th Infantry Regiment, 11th Brigade, Americal Division — one of whose platoons the diminutive Calley led to little acclaim. Widely regarded as incompetent, peers and subordinates often noted that he was incapable of reading maps or using a compass. His own company commander routinely addressed him as “Lieutenant Shithead.”

In September 1969, Lieutenant Shithead was charged with the deaths of 109 “Oriental human beings” — a figure that represents no more than a quarter of those who actually died at My Lai.

The atrocities at My Lai occurred less than two months after the beginning of the Tet Offensive. US forces were carrying out the policy of “search and destroy” throughout Quang Ngai province, where such operations killed over 50,000 civilians and destroyed roughly two-thirds of the provincial villages in 1967-1968. When Charlie Company was instructed to move against four hamlets that constituted the village of My Lai, they expected to find remnants of the 48th NLF Battalion; encountering nothing of the sort, the company destroyed the village and nearly everyone in it. After more than a year of official silence, the story of My Lai surfaced in November 1969 thanks to the investigative journalism of Seymour Hersh and several courageous letters written to Nixon administration officials and Congressional leaders by soldiers who had witnessed war crimes in Vietnam and had heard about the events of March 1968. Lt. Calley was formally charged on 5 September 1969.

At Calley’s trial, Private Dennis Conti testified for the prosecution:

Lieutenant Calley came out and said, “Take care of these people.” So we said, okay, so we stood there and watched them. He went away, then he came back and said, “I thought I told you to take care of these people.” We said, “We are.” He said, “I mean, kill them.” I was a little stunned and I didn’t know what to do. He said, “Come around this side. We’ll get on line and we’ll fire into them.” I said, “No, I’ve got a grenade launcher. I’ll watch the tree line.” I stood behind them and they stood side by side. So they — Calley and Meadlo — got on line and fired directly into the people. There were bursts and single shots for two minutes. It was automatic. The people screamed and yelled and fell. I guess they tried to get up, too. They couldn”t. That was it. They people were pretty well messed up. Lots of heads was shot off, pieces of heads and pieces of flesh flew off the sides and arms. They were all messed up. Meadlo fired a little bit and broke down. He was crying. He said he couldn’t do any more. He couldn’t kill anymore people. He couldn’t fire into the people any more. He gave me his weapon into my hands. I said I wouldn’t. “If they’re going to be killed, I’m not going to do it. Let Lieutenant Calley do it,” I told him. So I gave Meadlo back his weapon. At that time there was only a few kids still alive Lieutenant Calley killed them one-by-one. Then I saw a group of five women and six kids — eleven in all — going to a tree line. “Get ’em! Get ’em! Kill ’em!” Calley told me. I waited until they got to the line and fired off four or five grenades. I don’t know what happened….

Calley’s use of the Nuremberg defense — that he was merely following orders — did not withstand the scrutiny of the jury. On April Fool’s Day 1971, two days after Calley was convicted and one day after being sentenced to life in prison for murdering 19 people, President Nixon ordered him transferred to house arrest, partly in response to the outpouring of public support for the now-convicted mass murderer. Calley became a celebrity for true-believers on the American right; even George Wallace paid him a personal visit during his house arrest.

After three years of living in his Ft. Benning apartment, Calley was paroled in September 1974. He continued to describe the events at My Lai as a “battle,” although not one round of enemy fire was taken that day.

In the spring of 1972 South Vietnamese forces — claiming to be rooting out NLF “terrorists” — destoyed the hamlet to which most of the survivors of My Lai had been relocated.