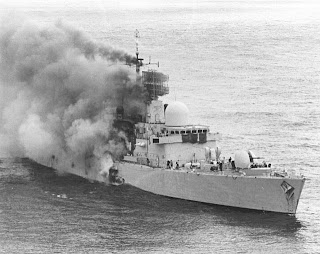 HMS Sheffield was the first of the Royal Navy’s Type 42 Destroyer, a class designed to supply fleet air defense. Theoretically, the Type 42 destroyers were supposed to protect a new Royal Navy aircraft carrier, but the cancellation of this carrier altered the mission. Displacing 4350 tons, HMS Sheffield could make 30 knots and carried a twin Sea Dart SAM launcher. Like virtually all post-WWII warships, Sheffield was almost completely unarmored. Two Type 42 destroyers, Hercules and Santisima Trinidad, had been sold to Argentina during the 1970s and served opposite Sheffield in the Argentine Navy during the war.

Sheffield was part of Task Force 317, the fleet assigned to retake the Falklands. On May 4, 1982 HMS Sheffield was performing an air defence patrol when two 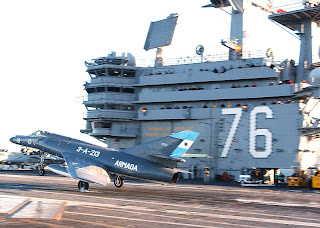 Argentine Super Entendards, flying at low altitude, managed to approach within 6 miles before releasing an Exocet missile. Both the Super Entendards and the Exocet missiles had been sold to Argentina by France. Although the French refrained from directly intervening in the war, they did allow the Royal Navy to study and operate Super Entendards in anticipation of air/naval combat. The missile was not detected by radar, and visual identification gave Sheffield very short warning. Sheffield was not the first warship struck by a guided missile. The Germans first deployed guided anti-ship munitions in 1943, successfully sinking the Italian battleship Roma with a Fritz X glider bomb. Roma, en route to surrender at Malta, took two hits, exploded and sank. HMS Warspite took hits from three Fritz X missiles a few weeks later and barely survived. Those weapons weighed about 1400 kg and carried a 320 kg warhead. In 1967, two Egyptian missile boats hit the Israeli destroyer Eilat with Soviet supplied Styx anti-ship missiles, which weighed 2300kg and carried a 450kg warhead. The Eilat is thought to have been destroyed simply by the kinetic energy of the strikes, rather than through the detonation of the warheads. An Exocet weighs about 600kg and carries a 160kg warhead, but is slightly faster than a Styx and much faster than a Fritz X. For a last bit of comparison, an 18″ shell from HIJMS Yamato weighed about 1450kg, although the shell would fly much faster than the missiles and would not lose weight from fuel consumption along the way.

The missile that hit Sheffield struck amidships and tore a large hole in the hull, but probably didn’t explode. Nevertheless, the kinetic force of the impact, combined with the dispersion of rocket fuel, severely damaged the destroyer and started a serious fire. Electrical and water systems were disrupted, hampering damage control efforts. With fires raging out of control, the ship was abandoned. While awaiting rescue, the crew sang Monty Python’s “Always Look on the Bright Side of Life”. In spite of the severe damage, Sheffield did not immediately sink. An early effort was made to salvage the ship, and she was taken under tow. However, it was determined that repairing the ship would be prohibitively expensive, and Sheffield was scuttled six days after the initial attack.
The destruction of HMS Sheffield cost 20 British lives, but neither deterred the British war effort nor significantly decreased Royal Navy capabilities. One other Type 42 destroyer, HMS Coventry, was sunk during the war, although by free fall bombs rather than with an Exocet missile. The Argentine Air Force would also successfully destroy the frigates Antelope and Ardent, both with free fall bombs. Five years later two Exocet missiles launched by an Iraqi Mirage fighter struck the frigate USS Stark, killing 37 but failing to sink the ship. Eight Type 42 destroyers remain in service with the Royal Navy, and one with the Argentine Navy.