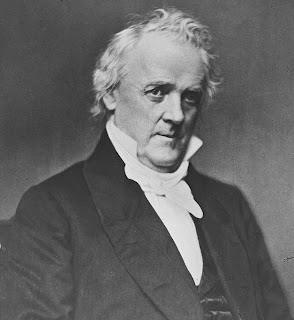 James Buchanan, arguably the worst chief executive in American history, was born on this date in 1791. The only president to hail from Pennsylvania, Buchanan stood for nearly everything the state’s Quaker founders detested, including the institution of slavery, which he sought to extend before watching inertly as it cleaved the nation in two.

A lawyer by training, Buchanan ascended into political life as a young man and migrated from the Pennsylvania House of Representatives to the US Congress, in both of whose chambers “Old Buck” resided during the 1820s and 1830s. When not enrolled as a legislator, Buchanan was employed as a diplomat, serving the Tennessee imperialist James K. Polk as Secretary of State during the most priapic era of Manifest Destiny, 1845-1949 1849 (oops). Two years before his election to high office, Buchanan gave even more ballast to his imperialist credentials by helping draft the disastrous Ostend Manifesto (1854), which essentially demanded that Spain agree to the sale of Cuba to the United States. The manifesto, composed in Belgium, advised President Franklin Pierce that if Spain proved “dead to the voice of her own interest, and actuated by stubborn pride and a false sense of honor, should refuse to sell Cuba to the United States,” the United States would be obliged to act strongly in the name of “self-preservation.” Insisting that Cuba’s domestic troubles might spill into the southern United States, Buchanan and his fellows advised that the US could rightfully dislodge the island from Spanish rule. They likened it to a desperate individual “tearing down the burning house of his neighbor if there were no other means of preventing the flames from destroying his own home.”

The Manifesto was a disaster for slavery’s advocates, who were ever more desperately arguing that the extension of the Peculiar Institution was the only means of preserving it where it already existed. The document fueled Northern suspicions that elements of the “Slave Power” were mobilizing to thwart the ambitions of free white landowners. Such concerns were further fueled by the insistence of Southern Democrats — and even many Whigs — that the Missouri Compromise and the Compromise of 1850 had unlawfully restrained slavery’s growth into the Western territories. On the great moral and political questions of the day, Buchanan was unmistakably supportive of the Southern cause.

When Buchanan was elected to the White House in 1856, only five of the sixteen so-called “Free States” endorsed his ticket, while the slaveholding regions of the country voiced unanimous approval. As President, Buchanan returned the favor. He heartily congratulated the Supreme Court on its notorious Dred Scott decision, which was issued mere days after his inauguration; he supported the admission of Kansas (where the Civil War had already commenced) as a slave state; and when the first, petulant wave of Southern secession occurred in late 1860, Buchanan blamed the “intemperate interference of the Northern people” for the troubles. While Buchanan had six years earlier recommended an imperial war against Cuba in the name of “self-preservation,” he could not bring himself to lift a finger in the cause of preserving the Union. Instead, he insisted that the President could do nothing to scold a recalcitrant state like South Carolina. Moreover, he urged Congress — whose lower house was run by a free-soil Republican majority — to succumb to the demands of man-stealers and lawbreakers. By forever securing white rights to human property, Buchanan believed that a Constitutional amendment would “restore peace and harmony to this distracted country.”

Buchanan then did practically nothing until he left office in March 1861.