Let’s say you’re the sort of goob who argues that African Americans served willingly in the Lost Cause of the Confederacy (scroll down in comments for a priceless takedown from Rob — this is also the thread that got Tom Hilton and Erik Loomis banned from Treason-in-Defense-of-Slavery Yankee, several weeks before Bob Owens offered me the pink slip.) If so, you’ve probably seen — and maybe even purchased — this picture of what purports to be the First Louisiana Native Guard, one of the black units that presumably fought for the rights of white people to own their brothers and sisters: 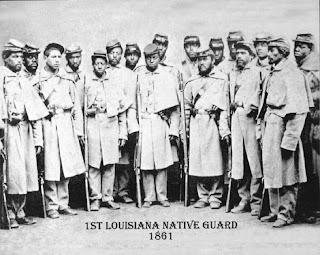 It’s inspiring, really — what better way to show the world that the American Civil War had nothing to do with racism or slavery after all? Look at ’em! Dignified, stoic. No bleeding heart Republican is going to tell them what to do.

Well, via Civil War Memory, we learn that the photo is actually of a Union detachment, formed and photographed in Philadelphia sometime in late 1862. 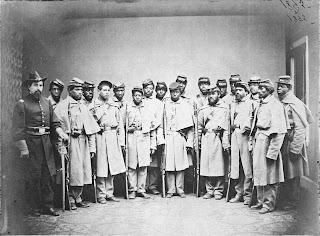 Turns out the photo was also used as the inspiration for a Union lithograph used to recruit black soldiers — who in any case needed few inducements, ideological or material, to take up arms against the cracker masses. As for the Louisiana Native Guard itself? The authors of the paper explain why the neo-Confederate souvenir-mongers felt obliged to look elsewhere to substantiate their fantasies:

The actual 1st Louisiana Native Guards, consisting of Afro-Creoles, was formed of about 1,500 men in April 1861 and was formally accepted as part of the Louisiana militia in May 1862. The Native Guards unit (one of three all-black companies) never saw combat while in Confederate service, and was largely kept at arm’s length by city and state officials; in fact, it often lacked proper uniforms and equipment. “The Confederate authorities,” James Hollandsworth has written, “never intended to use black troops for any mission of real importance. If the Native Guards were good for anything, it was for public display; free blacks fighting for Southern rights made good copy for the newspapers.” The unit apparently was never committed to the Confederate cause, and appears to have disobeyed orders to evacuate New Orleans with other Confederate forces; instead it surrendered to Union troops in April 1862.

. . . and here’s a relevant review from Loomis, whose banning from TIDOS Yankee means that Bob Owens will continue to while away in ignorance of this apparently fine book . . .