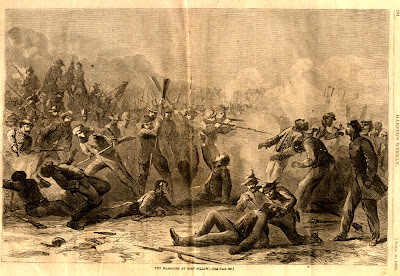 Today is the anniversary of the massacre of Union soldiers at Ft. Pillow, Tennessee, in 1864. Located in Jackson Henning, Tennessee, about 40 miles from Memphis, the fortress complex had been abandoned by the Confederate Army and occupied by 300 Tennessee cavalrymen and 300 Union troops. Of the latter, nearly all were African Americans newly recruited into a war that was now devoted to the destruction of slavery. The Confederate assault was led by Lt. General Nathan Bedford Forrest, a plantation owner and slave trader who would rise three years later to the rank of Grand Wizard of the Ku Klux Klan. Outmatched by 2500 Confederate soldiers, the Union garrison — which had refused to surrender — was overrun within a matter of hours and suffered extraordinary casualties. After resistance had ended, Forrest’s troops shot, burned, tortured and mutiliated both living and dead. Acting Master William Ferguson of the U.S. Navy arrived to pick up survivors and to bury the dead. According to Ferguson’s written report of the event, delivered on April 14 to Major General Stephen Hurlbut,

[a]ll the wounded who had strength enough to speak agreed that after the fort was taken an indiscriminate slaughter of our troops was carried on by the enemy with a furious and vindictive savageness which was never equaled by the most merciless of the Indian tribes. Around on every side horrible testimony to the truth of this statement could be seen. Bodies with gaping wounds, some bayoneted through the eyes, some with skulls beaten through, others with hideous wounds as if their bowels had been ripped open with bowie-knives, plainly told that but little quarter was shown to our troops. Strewn from the fort to the river bank, in the ravines and hollows, behind logs and under the brush where they had crept for protection from the assassins who pursued them, we found bodies bayoneted, beaten, and shot to death, showing how cold-blooded and persistent was the slaughter of our unfortunate troops.

Of course, when a work is carried by assault there will always be more or less bloodshed, even when all resistance has ceased; but here there were unmistakable evidences of a massacre carried on long after any resistance could have been offered, with a cold-blooded barbarity and perseverance which nothing can palliate.

Forrest somehow managed to avoid prosecution for violating the laws of war. Indeed, he remains perhaps the most famous Tennesseeans of the 19th century. More than 30 monuments and state markers have been cast in his honor, including a statue at the state capitol building in Nashville. A state park bears his name, as did a World War II-era Army base in Tullahoma; the ROTC building at Middle Tennessee State University is named for the Klan leader and war criminal, as are two public high schools in the Volunteer State.