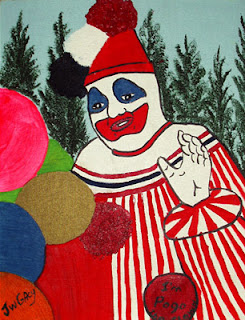 Although his father was an alcoholic and Gacy himself suffered a head injury and heart problems as a youth, his childhood was more or less uneventful. As a young man he meandered his way into the world of business, becoming a successful shoe salesman in Illinois and the manager of a Kentucky Fried Chicken restaurant in Iowa. After enduring a divorce and serving a brief prison term for child molestation — a crime that stemmed from his days managing the KFC — Gacy returned to the city of his birth in 1971. He remarried, becoming a stepfather to two children, and during his free time — when he wasn’t impressing the community with his volunteer work as an amateur clown — began raping and strangling young men and boys. Dismayed by her husband’s erratic behavior and his peculiar reading habits, Gacy’s second wife left him in 1976; he was less than devastated by the divorce and continued about both his work and his hobbies. At the time of his confession in December 1978, John Wayne Gacy had murdered 33 people, most of whom he buried underneath his house and garage, which he famously described as an unlicensed funeral home.

Four days before his 38th birthday, Gacy was condemned to death by the state of Illinois. He spent the next 14 years at Manard Correctional Facility outside Chester, Illinois, where he passed much of his time painting clowns. In May 1994, Gacy was injected with a lethal dose of sodium thiopentol, pancurinium bromide and potassium chloride after reinforcing his arteries with a final meal of fried chicken and french fries. His last words, according to legend, were “kiss my ass.”

A cultural icon, John Wayne Gacy has been the subject of dozens of books, numerous documentary films, and countless songs. Of the latter, this is the only one worth a damn, even though it understates Gacy’s actual body count: