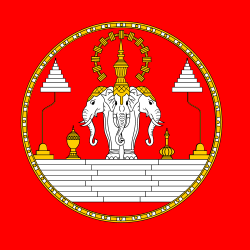 In 1351, a Lao princeling who had fled as a refugee to the Court of Angkor raised an army of 10000 Khmer to defeat rebellious Lao tribes on Angkor’s northern reaches. Fa Ngum, as he was called, traced his ancestry to Khun Lo, a legendary king of the Lao who had lived in the eigth century. Fa Ngum successfully conquered all of the Lao peoples, covering a territory including modern Laos and parts of Vietnam, Cambodia, and Thailand. He established the Kingdom of Lan Xang Hom Khao, a feudal empire that lasted until around 1700. Following the death of King Suriyavongsa, the kingdom disintegrated into three parts, and began to fall prey to Burmese and Siamese invasion. By the 1860s, only a sliver of independent Lao territory, centered around the city of Luang Prabang, still existed. Then, the French arrived. Having brought modern Vietnam and Cambodia under control, the French attempted but failed to extend their influence to Siam. This failure left part of the Lao speaking people under Siamese rule, and part under the French. The Kings of Luang Prabang were recognized by the French as the royal family of the new Laotian protectorate, and largely collaborated with French rule, preferring French masters to Siamese. Indeed, King Sisavang Vong opposed initial Laotian moves toward independence in the wake of World War II, preferring to remain with the French. However, Laotian nationalism had developed under the French occupation, and the activities of the Viet Minh made French control over Indochina uncertain.

The Geneva Conference of 1954 secured formal Laotian independence, and Sisavang Vong’s position as King of Laos. However, it did not end the war that had erupted in Indochina. The Lao Communist Party was created in 1955 with assisstance from the Vietnamese Communist Party. The Pathet Lao (the larger ethnic movement that emerged around the Communist Party) was dependent on Vietnamese support, including significant shipments of weapons and advisors, finances, and sanctuary areas. Laos became part of the Vietnamese civil war, and from 1964 until 1968 became site of a proxy conflict between North Vietnam and the United States. King Savang Vatthana (who assumed the throne in 1959) could do little other than represent Laos on the international stage. In 1968 regular units of the Vietnamese People’s Army (sometimes incorrectly referred to as the NVA) largely destroyed the Royal Laotian Army, causing the United States to respond with heavy bombing and the promotion of militia and other proxy forces. In 1971 the United States sponsored a South Vietnamese invasion of southern Laos. VPA forces crushed the ARVN advance without difficulty. After 1973, the Pathet Lao responded to US withdrawal from the region by steadily increasing its power and territory. Shortly after the fall of Saigon the Pathet Lao took power in Laos.

On December 2, 1975 the Communists forced King Savang Vatthana to abdicate. The King refused to leave Laos, and accepted a position as advisor to the President. In 1977 he, Crown Prince Vong Savang, and Queen Khamphoui were arrested and thrown into an internment camp. Most reports suggest that the King, Queen, and Crown Prince died in 1978, although the Prime Minster of Laos insisted that the King did not die until 1984. Shortly before the abdication, Savang Vatthana’s youngest son, Sauryavong Savang, escaped Laos by swimming the Mekong River into Thailand. Eventually relocating to Paris, he became head of the family upon his father’s death. 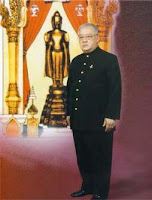 Prospects for a return to the throne are uncertain. The royal family has in been extremely active in the exile community, and continues to seek a restoration of the monarchy. It is thought by some that Sauryavong Savang ordered an ill-fated attack in 2000 against a Laotian border post. The raid failed, and the current Laotian government has done little to indicate a predisposition towards either negotiations or collapse.

Trivia: The heir to which throne has lived in a two bedroom apartment on the Upper East Side since 1945?