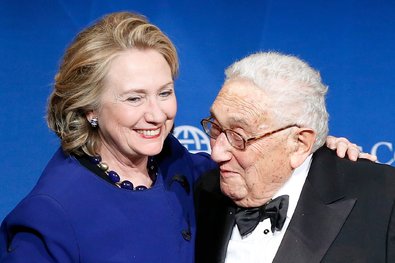 This bit of semi-sourced Politico gossip posing as reporting should be taken with a pillar of salt:

As Hillary Clinton’s presidential campaign reaches out to Republicans alarmed by Donald Trump’s national security blunders, there’s a group of high-profile GOP hold-outs whose endorsement would be a major coup if the Democrat could win them over.

Condoleezza Rice, James Baker, George Shultz and Henry Kissinger are among a handful of so-called Republican “elders” with foreign policy and national security experience — people who have held Cabinet-level or otherwise high-ranking positions in past administrations — who have yet to come out for or against Trump.

A person close to Clinton said her team has sent out feelers to the GOP elders, although it wasn’t clear if those efforts were preliminary or more formal requests for endorsement, or if they were undertaken through intermediaries. Clinton campaign aides did not respond when asked if they had solicited endorsements or tried to persuade the elders to speak out against Trump.

However, Pierce has a point that, if there is anything to this, it’s a war criminal too far:

If Hillary Clinton actively seeks, or publicly accepts, the endorsement of Henry Kissinger, I will vote for Gary Johnson and Bill Weld on November 8. (Jill Stein, you might’ve been a contender, but going off to Red Square to talk about Vladimir Putin and human rights? Being an honored guest of a Russian propaganda channel? I don’t think so.) Kissinger is a bridge too far. He is responsible for more unnecessary deaths than any official of a putative Western democracy since the days when Lord John Russell was starving the Irish, if not the days when President Andy Jackson was inaugurating the genocide of the Cherokee. He should be coughing his life away as an inmate at The Hague, not whispering in the ears of a putatively progressive Democratic presidential candidate. I can tolerate (somewhat) the notion of her reaching out to the rest of the wax museum there, but Kissinger is a monster too far. He is my line in the sand. I can choose who I endorse to lead my country, a blessing that Henry Kissinger worked his whole career to deny to too many people.

(Note that he prefaces this with the observation that he’s in the bluest of blue states, so his presidential vote is purely symbolic in any case).

The other thing that’s noteworthy about this is that Bush administration foreign policy figures like Rice, and their hangers-on in the form of whatever Kagan is being quoted in the Politico piece, have somehow retained their Very Serious credentials, even after constructing and cheerleading one of the two biggest foreign policy debacles in US history. By way of comparison, the historical parallel would be George H.W. Bush trying to get Robert McNamara’s endorsement in 1988.