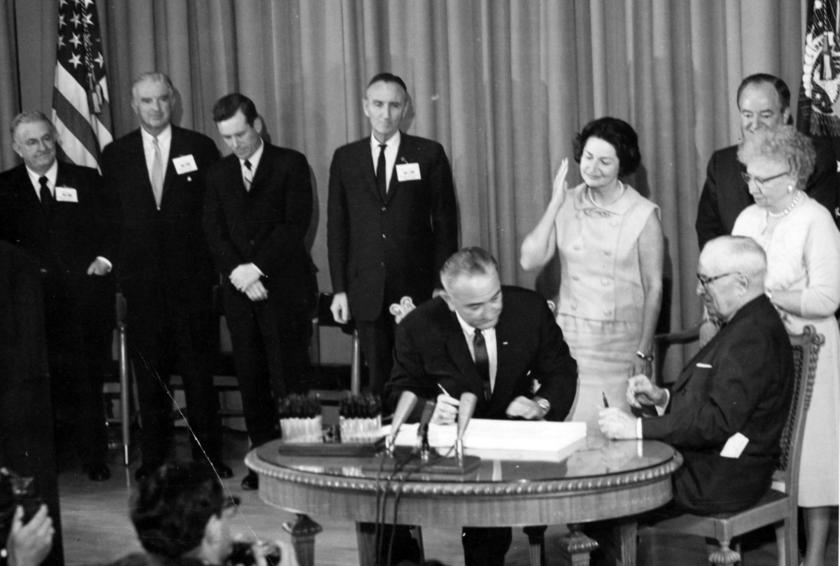 This is a guest post by Dr. Chris Koski, Associate Professor of Political Science at Reed College.

Folks should understand that the current House and Senate bills are mostly not actually about the Affordable Care Act (ACA)- these bills are about lowering taxes and reforming Johnsoncare – a.k.a. Medicaid.

Indeed, the Affordable Care Act provides the ruse for the Republicans to undertake dishonest legislative action against the poor for the benefit of the wealthy. The legislative history of Medicaid is tightly linked to two broadly popular programs that undergird American social welfare policy: Medicare and Social Security. The Medicaid program was created in 1965 as part of the same bill as Medicare – and that bill was authorized by title XIX of the Social Security Act.

The legislative fight for Medicare and Medicaid were linked for a variety of reasons – and, these are hard fought Democratic accomplishments. Truman first proposed each and was fought by a Republican Congress. Eisenhower was lukewarm to the idea, but Johnson pushed the bill through. In a supremely classy move, Johnson issued the first two Medicare cards to Harry and Bess Truman.

Most of what the current House and Senate health “care” bills do is to modify the tax code and gut the Truman/Johnson legacy of Medicaid. Initially focused on the poor, Medicaid has been expanded over the years to emphasize seniors’ long term care and children – two items left out of the Medicare side of the equation. CHIPs (Children’s Health Insurance Programs) are widely popular and widely successful in saving states money and, yes I’m a bleeding heart, leading to healthier children.

For a party that hates the idea of income redistribution, both the House and the Senate versions redistribute income to a greater degree than the original Affordable Care Act. Consider the following:

1) In addition to rolling back the ACA’s Medicaid expansion, both the Senate and the House versions *further* reduce Medicaid funding to states by adding a “per capita cap” to Medicaid. According to Brookings: “The AHCA would cap the total amount of federal funding that states could receive for each person they enroll, a structure commonly referred to as a “per capita cap.” The Senate bill additionally reduces something called the “provider tax threshold” from 6 to 5 percent. This essentially reduces the capacity of states to generate tax revenue from hospitals that receive Medicaid patients. The CBO did some preliminary work on this in December and found that such a move would reduce federal expenditures to states by about $16 billion (this is no doubt an important number for scoring this go around). The bottom line: the bill makes less money available to states to pay for Medicaid beyond rolling back the ACA’s Medicaid expansion.

2) In addition to rolling back taxes on investment income greater than $250000 and a .9% Medicare Surtax (which funds MEDICARE, you know, one of the greatest programs we have in America and one that is in the red because it is so popular), both bills reduce the pool of eligibility for Medicaid. The House bill allows for states to prevent lottery winners from receiving Medicaid, but leaves it up to the states to set a high income threshold. Finally, both bills allow for states to reduce the number of individuals on Medicaid by instituting a “work” requirement. At the same time, both bills get rid of the Obamacare requirement that employers cover their workers. Millions of people working at low-wage jobs could immediately qualify for Medicaid once their employers decide not to offer health coverage. Of course, this is to the firm’s benefit and, once again, the American safety net will subsidize the likes of Walmart and other big box retail by becoming its insurance provider.

Many US companies live off of food stamps, welfare checks, and Medicaid but fly to work on corporate jets – makes ODB’s driving to the welfare office in a limousine look like amateur hour.

At least the ACA asks them to pay for health care.

3) Most egregious: Both the House and the Senate bills expand the “age rating” from 3:1 to 5:1. The age rating is the amount of money insurance companies can charge based upon the policy holders age. For a 3:1 ratio, the current status quo, insurance companies can charge older customers up to 3 times the rate as younger customers. Both bills want to change the law to allow insurers to charge the elderly *5* times as much.

4) Worst: Both the House and the Senate bill intend to turn Medicaid into a block grant; an arrow in the quiver of Republicans for a long time (pre-Obama). Block grants are sold as giving states flexibility in how they spend federal monies – which is true – but there is often very little oversight in how these funds are spent (see, for example HUD block grants for Hurricane Katrina in Mississippi). Removing the requirement that firms cover their employees will increase demands on the Medicaid program, forcing states to make tough choices regarding coverage – tough choices with far less revenue.

Block grants shift health care choices from doctors and hospitals to local politicians – which one would you prefer to take care of your medical issues?

The block grant proposal will redistribute inequality across the states to create the very same conditions that Kennedy and Johnson observed in the 1960s in Appalachia and the rural south. Medicaid was part of the broader War on Poverty Strategy. Yes, war metaphors are silly because we tend to use them for problems that are generally analogous to unwinnable wars (see: Drugs), but suffice to say that the problem with poverty was not just an individual issue, but a system of income redistribution from poor to rich that was entrenched by state interests (often the same as the rich). Johnson didn’t fully trust states, which were controlled by interests that intentionally stratified societies, to distribute health care dollars equitably. A block grant system will further exacerbate the two Americas problem we currently have. Fittingly, Appalachian senators are in a position to do the right thing today – Portman (R-OH) and Caputo (R-WV).

IN SUM: Both bills take money from the poor (less Medicaid expenditures, fewer citizens eligible, increased premiums for the elderly, workers in firms whose health care will go away) and give it to the rich (individuals with significant investment income, insurance companies, and firms who no longer pay health care costs).

Other folks have written about this, but the scale of the Republican AHCA is truly historic, reaching back to the very roots of the American Health Care system. It is not just about Obamacare.

Rand Paul is right on this one: the bill endorsed by both chambers – controlled by Republicans – does not fulfill the campaign pledge to repeal Obamacare. It goes much farther.