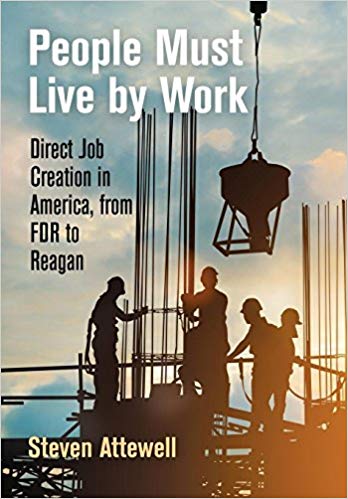 As I announced last week, my first academic book has officially been published (available to the reading public here and here) and to celebrate, I’m running an online book club where we’ll discuss the book a chapter-per-week.

This week, we’ll be discussing the Introduction, which goes all the way from the social policies of Thomas Cromwell to the screeds of Amity Schlaes, and along the way tries to explain why I took up this project in the first place.

As you can see from looking at the many subheadings, the Introduction of People Must Live By Work has a lot to do: on the one hand, it has to explain where the idea that “the government had both a moral mandate and the practical capacity to obliterate unemployment altogether” by directly hiring the unemployed came from; on the other hand, it has to explain how this book stands in relation to a broader literature that spans several disciplines and more than fifty tumultuous years of American history.

In the first half, I describe how a demand for the government to provide work for the unemployed emerged from below as early as the 16th century before pushing itself to the foreground in the 19th century as the spread of industrial capitalism and wage labor combined with the emergence of mass politics created both the urgent need for guaranteed work and the expectation that the state had to listen. Well into the 20th century, however, networks of elites in government, the academy, the press, and the private sector fought back any attempt to secure “the right to a job” as an impermissible violation of the natural laws of economics and classical liberalism’s maxims of good government. Not until the Great Depression blasted apart the walls of orthodoxy and brought in the New Deal were advocates for the government directly hiring the unemployed brought into national power, as Harry Hopkins and his aides joined the Roosevelt Administration unsatisfied with existing solutions for relieving the needs of the mass unemployed.

In the second half, I grapple with a scholarly literature which has lumped in what I call direct job creation (DJC) in with a broad range of topics and labels, from “employment policy” and “job[/s] policy” to “work relief” to “public works,” and which has also tended to discuss the pre- and post-WWII history of these policies in isolation. I prefer a different approach, in which DJC is disaggregated from similar policies (especially because these policies were often competing alternatives), and which the two halves of this history are brought together through the lens of direct job creation.

In this particular case, I don’t have to go particularly far to recall what inspired this particular part of the overall project, because I write directly about what drove me to pursue this topic:

This book was inspired by my experience of reading Arthur Schlesinger’s description of the Civil Works Administration in The Coming of the New Deal while watching the Democratic primary debates in 2004. As each candidate talked about the need to “create jobs,” “build jobs,” and “grow jobs,” I was reading Schlesinger’s account of how the U.S government had created more than four million jobs in less than three months, at a time when the most advanced administrative technologies available were the rotary phone and the carbon copy. As a budding policy wonk, I went onto the websites of the various candidates and was disappointed to discover that their plans amounted to little more than small pots of money for small business loans or tax credits to hire additional personnel. The difference in ambition between the past and the present fascinated me, and I began to wonder why no one was talking about the Civil Works Administration, why we weren’t taught about it in school.

This impulse became even more intense in 2007-8, when the Great Recession shattered comfortable assumptions that central banks had tamed the business cycle or that the market was incapable of such failures. All of the sudden, the New Deal was back as a topic of popular political discourse, as the nation debated how far the government could or should go in fighting the largest economic collapse since the 1930s. And yet the idea that the government should directly hire the unemployed remained a relatively fringe part of the discussion, while debates for and against mainstream Keynesian stimulus took center stage – which ironically mirrored the way that debates in the 1940s and 1960s were unfolding in the archival papers I was going through at the time.

Finding the origin of an idea is one of the more difficult tasks I’ve undertaken as a historian, because ideas are so mutable, so easy to obscure behind different terminology. Going into the project, I knew about the New Deal’s jobs programs, and I knew enough about French history to know that the idea of the “droit au travail” went back at least to 1848, and in my mind I drew a straight line between that and various protests (the Tompkins Square Park Massacre, Coxey’s Army) in the U.S during the late 19th century. Rather naively, I assumed a straightforward relationship between economics and politics: that the Industrial Revolution created a class of precarious wage workers who then responded to capitalism’s booms and busts by demanding government provide work in moments of crisis.

What surprised me was to learn that this idea was much older than the Industrial Revolution:

In 1536, Thomas Cromwell introduced a draft of a Poor Law into Parliament that would have provided for public works jobs for the unemployed, financed by an income tax on the wealthy.  The bill was promptly shredded by Parliament. Instead, English Poor Law moved in the opposite direction, frowning on  the very idea of relief for the able-bodied poor Nevertheless, the idea persisted. In 1660, the Quaker “Appeal to the Parliament Concerning the Poor That There Be No Beggar in England” called for state-operated labor exchanges, and in 1696 John Bollers made one of the first proposals for the establishment of state-sponsored cooperative factories for unemployed workers as an alternative to traditional poor relief.

In addition to teaching me that we can’t always make such easy assumptions about how the economy affects politics, this made me think about direct job creation in a very different way, as a much more primal expression of a demand that the social contract be upheld, no different to how angry peasants and bread rioters demanded that the “moral economy” be upheld by the government selling grain at fixed prices during times of famine that go all the way back through the Middle Ages and even to the grain dole of the Roman Republic. And if the idea was that old, why did it take until the 1930s to see it expressed in law and public policy? What inspired the hostility that saw Cromwell’s bill turned into “an act for the whipping of beggars” and saw the armies of the Second Republic turn their cannons on Paris rather than give in to demands that the “droit au travail” be honored in fact as well as on paper?

On a different topic, one of the things that changed the most during the process of publishing this book was this introduction – originally, a lot of the literature review was located at the beginning of each chapter, but the decision was made in the drafting process to bring as much as possible into the introduction to allow the rest of the book to flow more smoothly as a historical narrative. Another thing that changed greatly was that, originally, I had used the actor-network theory of Bruno Latour as my main theoretical model in much of the book. However, it was pointed out that, in the first place, the theoretical sections made the book more dense and jargony than it needed to be, and in the second place that trying to go back and add Latourian theory to the chapters that didn’t include it already would make those chapters much longer and clunkier.

Towards the end of the Introduction, I discuss the importance of the public’s historical memory, and the way in which conservatives have been remarkably successful in getting people to believe that “the New Deal failed, that the War on Poverty was lost, that liberalism was responsible for stagflation in the 1970s.” In this fashion, conservative activists aim to both shift the conventional wisdom in the media and in Washington, but also to tamp down the public’s expectations of the ability of the government to provide solutions for their problems.

Academics and liberal activists have done a rather poor job of fighting their own corner on this issue. For the best of motives – a belief that the New Deal or the War on Poverty should have gone further, either in reshaping capitalism or in fighting racism – academics have tended to emphasize the limitations and failures of historical state action, while still believing that more should have been done. Unfortunately, this has left them open to having their critiques block-quoted by the opposition to lend the appearance of scholarly rigor to their screeds, while scholarly exhortations to do more languish in obscurity. And for their part, liberal activists are simultaneously burdened with the narratives that have been handed down to them while lacking access to a more thorough understanding of the history of these programs.

Public At Work is my own contribution to this debate. Throughout the book, I use archival materials to recover not just how direct job creation worked in practice, but also the lost world of economic ideas that were needed to bring these programs into being. And rather than overly couching my argument in scholarly demurrals and qualifications, I state outright that direct job creation works, has worked, and can work in the future.