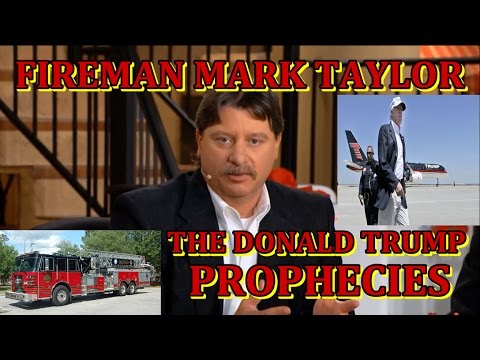 A story has to be sufficiently bonkers for me to do a little drive-by quickie post like this about it, so strap yourself in for a short, crazy ride!

Mark Taylor is a former firefighter who claims that while he was watching Fox News back in 2011, God personally told him that Donald Trump would become president of the United States. Taylor initially thought that meant that Trump would challenge President Obama when he ran for re-election in 2012, but when that didn’t happen, Taylor realized that was because it was God’s plan to keep Obama in office for a second term so that Americans could “build a righteous anger” necessary to elect Trump and thereby save the world.

When Trump was elected president in 2016, Taylor penned a book titled “The Trump Prophecies: The Astonishing True Story Of The Man Who Saw Tomorrow… And What He Says Is Coming Next” and quickly made a name for himself as a modem-day prophet and radical conspiracy theorist.

Hmmm. A crazy dude with a crazy mustache who makes up crazy conspiracy theories? I sure hope someone’s making a movie about this.

With an amazing track record like this, it was probably only a matter of time before Liberty University decided to turn Taylor’s life story into a feature film, which is exactly what it happening:

It was officially announced Jan. 26 that the Liberty University Cinematic Arts department would be working on a feature film getting national theatrical release.

“Commander” comes after the program’s first feature film “Extraordinary,” and a series of short films. “Commander” is an adaptation of the book “The Trump Prophecies.”

The film, which is slated to be released in October, is the true story of an ex-firefighter named Mark Taylor who in 2011, while recovering from PTSD, had a vision that Donald Trump would be President.

But if we may circle back to closer to the beginning, I have to share my favorite part of this article, which is this:

On top of that, Taylor warned that the Freemasons and the Illuminati are using a special frequency to change people’s DNA in order to make them hate Trump so that they are unable to seehow God is using him to save America.

Yes, clearly that’s the only way to explain why people hate Trump.