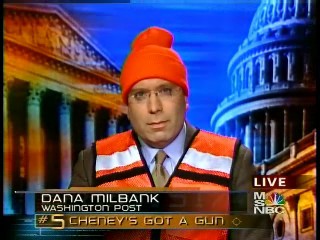 How much more Milbank could this be? I pray the answer is none, none more Milbank, because, like Scott’s equally disturbing search for Peak Clizza, it’s too horrifying to contemplate what could possibly lay beyond this new frontier in false equivalence and whataboutism:

It gives me no pleasure to say this, but the Democrats’ behavior at the State of the Union was embarrassing.

Actually I’m pretty sure it came close to giving Milbank an orgasm, as he lovingly stroked his oh-so-difficult to caress these days DC pundit equivalency keyboard. No you cannot unsee that.

I take a back seat to nobody in decrying President Trump’s cynical and divisive performance. He repeatedly exploited Americans’ divisions on race, guns, God, immigration — anything to distract from the broken promises, vulgarity and worse that define his presidency.

As Jon Chait pointed out yesterday, Trump’s rampant personal corruption, which has inspired him to transform the federal government into the equivalent of a Vegas casino count room back when the mob was running things, would be considered a massive and continual scandal under any other circumstances. Yet somehow none of this even merits mention in this remarkably brief laundry list, consisting of “broken promises” [BFD], “vulgarity” [no please, anything but vulgarity!], and a curiously unspecified “worse.”

But the Democrats, with their childish protests, took the bait. Symbolic dissent is fine, but this was a cacophony of causes: black clothing (for #MeToo), kente ties and sashes (because of Trump’s Africa insult), butterfly stickers (for the “dreamers”), red buttons (for a victim of racial crime) and the more bipartisan purple ribbons (for the opioid epidemic).

Oh no, a cacophony of causes! How can people reference sexual assault, racism, and xenophobia all at the same time? And don’t they realize they’re supposed to be sticking to problems that are genuinely bipartisan, such as those that affect ordinary, normal Americans, in places like Boise, Idaho, or perhaps the bottom of mine shaft in Appalachia? (See our forthcoming copiously illustrated 743-part series on this very question).

It gets worse from there if you’re inclined to get out of the boat.