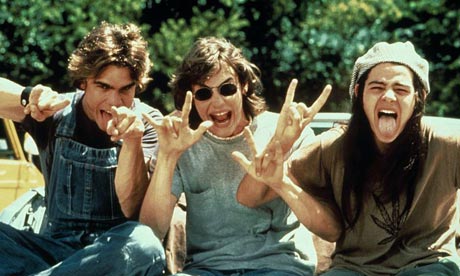 All the Young Dudes

I was in high school in the mid-70s, aka Peak Eagles, so I have a couple of things to say.

(1) Jesus that was a long time ago. Those of us born toward the end of the baby boom have had, for more than forty years now, the experience of being stuck with the sense that we’re listening to the previous generation’s music. Check it out kids: if you were a teenager in 1977, “the Sixties” were simultaneously still everywhere, and very much ancient history. We weren’t part of the Woodstock generation — we were a million miles away from that helicopter day — but the youth culture of people ten years older than us (an eternity at that age) still dominated everything, or at least it felt that way. (I think Douglas Coupland wrote about this around 1980, in an essay I’m too lazy to try to find right now).

(2) The cultural demographics of the baby boom are still everywhere. Can you imagine, in 1975, a bunch of people of all ages having a furious debate about the merits of the popular music of the mid-1930s? I mean maybe I’m unusually ignorant in this regard, or maybe it’s in part because my parents immigrated to this country as adults, but I literally can’t name a single popular song from 1935, or for that matter from that entire decade. But the 1970s (and of course the 1960s, and the backlash to them) are still very much in our midst.

(3) As for the merits of the Eagles, anyone who can’t appreciate, at the right place and time, a bit of tastefully understated pedal-steel guitar, probably doesn’t like ice cream either.