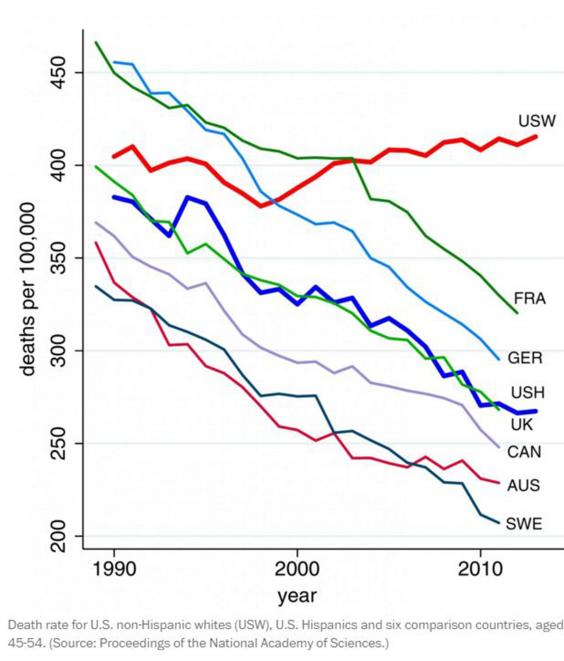 Anne Case and Angus Deaton have just published a paper full of some stunning public health data. The title is “Rising morbidity and mortality in midlife among white non-Hispanic Americans in the 21st century,” which is a bit misleading. What the paper chronicles is a genuinely shocking decline in the health of lower-SES white American adults between the ages of 30 and 64 over the past 15 years. (I”m assuming here that education levels can be used a good rough proxy for SES).

This decline been so steep that it has actually produced rising mortality rates for the entire cohort of 45-54 year old American whites over a 15-year period, which, if you follow public health statistics, is an almost unbelievable development, utterly at odds with what is happening in the population as a whole, not only in the US, but throughout most of the rest of the world, and in particular in other developed economies. (For example, mortality rates for all Americans between the ages of 45-54 declined by 44% between 1970 and 2013).

Moreover, Case and Deaton have identified the main drivers of this rise. More than half of it is accounted for by just three causes: “poisonings” (this means drug and alcohol overdoses, including prescription drugs, primarily pain-killing opioids), suicide, and chronic liver cirrhosis, which is usually a result of long-term alcohol abuse.

Here are some numbers from the paper:

For WNHAs with a high school degree or less, mortality rose from 601/100K to 735/100K — a 22.3% increase in mortality, in an overall social context in which mortality rates for almost all other groups are dropping by an average of around 2% per year.

Case and Deaton focus on the 45-54 year old cohort of WHNAs, but the same trends are almost as pronounced in every five-year cohort between the ages of 30 and 64 (see Fig. 4 in the paper).

I have some thoughts on what all this says about what has been happening in America over the past couple of decades, and what consequences these developments have had for the current political landscape, but for now I just want to present Case and Deaton’s numbers, which (and this too is significant) don’t seem to be getting anything like the attention they should, Gina Kolata’s coverage in the Times and Paul Starr’s story in the American Prospect notwithstanding.